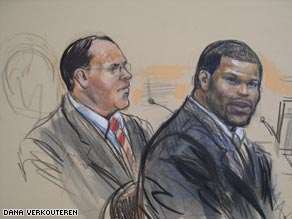 The details emerged in a Chapter 11 confirmation hearing in Virginia Eastern Bankruptcy Court to determine how Vick, 28, will work his way out of bankruptcy.

Vick's lawyer, Michael Blumenthal, told the court that the embattled footballer will take the stand first thing Friday and explain how he intends to turn over a new leaf after spending nearly two years in prison on a federal conspiracy charge.

Vick's 23-month sentence ends in July, but he is expected to be released from the federal penitentiary in Leavenworth, Kansas, in May and serve the remainder of his sentence in home confinement, most likely in Virginia. He is a native of Newport News.

The sports agent who landed Vick's landmark 10-year, $140 million contract with the Atlanta Falcons also testified that he expects Vick will be back in the game as soon as September -- if the NFL reinstates him.

Vick is in great shape and could once again command millions of dollars if he returns to football, Joel Segal told the court.

The decision to reinstate Vick rests with NFL Commissioner Roger Goodell, with whom Segal said he had consulted.

Vick was suspended from the NFL after his conviction but remains under contract with the Falcons, Segal said, though he does not expect the Falcons to retain Vick's rights if he is reinstated.

Vick and many of his creditors are depending on a return to football as his main source of income. But Segal admitted that he has no way of knowing whether Vick will be reinstated, because the decision lies with Goodell.

In the meantime, Vick is ready to "get back in the community in a positive light" and demonstrate remorse for his actions, Segal said.

He has agreed to participate in a documentary about him that will net him $600,000, Segal said. He will also work 40 hours a week for W.M. Jordan, a construction company based in Newport News.

The employment is not part of the official 61-page agreement tentatively worked out between's Vick's lawyers and numerous creditors.

The parties involved in the hearing will continue to present evidence and testimony in an effort to convince the judge that Vick qualifies for Chapter 11 bankruptcy.

Attorneys and representatives from the creditors, including Bank of America, the Atlanta Falcons and the City of Newport News, to name a few, packed the courtroom Thursday as the hearing got under way.

Vick's mother sat in the gallery with his fiancée, who blew him a kiss during one break in the proceedings.

Among the terms included in Vick's plan of reorganization: