NEW YORK (CNN) -- A 14-year-old girl disappears on her way home from school, another is last seen near her home and a 16-year-old vanishes after leaving her fast-food job for the day. 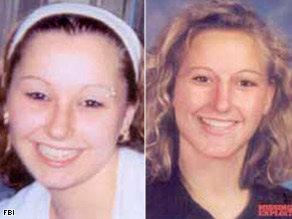 Amanda Berry is shown near the time of her disappearance in 2003, and how she might appear today.

All from the same neighborhood in Cleveland, Ohio, the girls disappeared within five blocks of each other over a four-year span, starting in 2003.

Agents and detectives from the FBI and Cleveland Police are looking into hundreds of leads in the cases and whether they may be linked, according to FBI Special Agent Scott Wilson in the agency's Cleveland bureau.

"We kind of put all three of these cases together to work them to see if there's any connection," Wilson said.

Amanda Berry, 16, vanished on April 21, 2003, after she left her job at a Burger King at about 7:30 p.m. But she never made it to her home just a few blocks away, the FBI says. Berry has pierced ears, a pierced left eyebrow and a scar on her lower abdomen. She would now be 22.

Georgina DeJesus was last seen at a pay phone around 3 p.m. on April 2, 2004, as she headed home from school. She and a friend had called the friend's mother seeking permission for a sleepover at DeJesus' house, but the answer was no.

The girls then parted ways, and DeJesus was never seen again. She was wearing a white jacket, a sky blue sweater, blue jeans and a cream shirt. She has a light birthmark on her right leg and pierced ears, the FBI says. DeJesus was 14 when she disappeared and would now be 19.

Ashley Summers, last seen July 6, 2007, has a heart-shaped tattoo with "Gene" on her upper arm. She was initially reported as a runaway after a family argument. "But the problem is, she's never been seen again," Wilson said. Summers, 14, would now be 15.

Citing FBI policy, Wilson declined to say whether there are persons of interest in any of the three cases. The girls did not know each other and the FBI would not say whether any of them had mutual friends or acquaintances.

"It's certainly very concerning to us that we have three young girls missing from the same general area and we have to look at every possibility of what happened to them," Wilson said.

All About Missing Persons • Federal Bureau of Investigation