Police investigate whether man's legs severed to fit in coffin

(CNN) -- Police in Allendale, South Carolina, are investigating whether a funeral home fit a 6-foot, 5-inch man into his coffin by severing his legs. 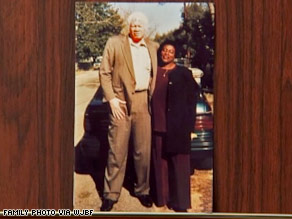 The wife of James Hines reportedly said the funeral home told her that her husband's coffin was long enough.

A former Cave Funeral Services employee has alleged since James Hines' death from skin cancer in 2004 that Hines was too tall for his coffin and that the funeral home took extreme measures to make him fit, Allendale County Coroner Hayzen Black told CNN.

Officials exhumed Hines' body Tuesday, Black said, and a fair amount of "undesirable evidence" was found, although he could not comment further.

The coroner's office handed the case over to law enforcement officials for a criminal investigation, he said.

Allendale Police Detective Donnie Hutto told CNN affiliate WJBF-TV that he could not comment on the condition of the body.

A Cave Funeral Services employee had no comment when asked about the matter.

But Ruth Hines, widow of the dead man, told WJBF that the allegations and exhumation of Hines' body are difficult for her.

"I'm just going through quite a bit," she said. "It's like starting all over again, and it's left me with hurt and numbness."

"According to the measurements on the casket, and the funeral director, we asked him, 'Was this suitable for his length?' and he said, 'Yes that will be perfect,'" Ruth Hines said.

Hines told WJBF that her family has used Cave Funeral Services for a number of years, and she isn't sure what the family will do in the future if the allegations are true.

All About South Carolina