(CNN) -- By the time the police officer kicked the door in, it was too late. Kerby Revelus was holding his 5-year-old sister, Bianca, and while the officer watched, he dragged a kitchen knife across her throat with such fury that he decapitated her. 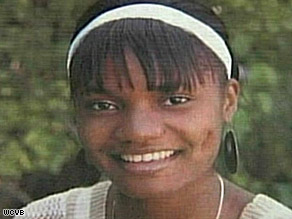 Samantha Revelus, 17, had called 911 for help after her brother attacked his sisters with a knife.

Mere seconds passed before other officers arrived and rushed into the home in the tony Boston suburb of 25,000.

Police had received a 911 call from another Revelus sibling, 17-year-old Samantha. Suffering from several deep cuts in her upper body, she was losing strength.

"It was clear that she knew she was mortally wounded," Wells said.

Samantha managed to explain that her 23-year-old brother had attacked his sisters with a knife, police said. When she was no longer able to keep talking, the injured teen handed her 9-year-old sister, Sarafina Revelus, the phone.

All the while, the kids' grandmother was doing laundry in the basement, apparently unaware of the savagery upstairs, police said. Mother Regina Revelus was at work, and father Vronze Revelus was not at home.

As officers surrounded the home and rushed into every room, Kerby ran into a bedroom where Samantha was on the floor, dead. Sarafina was on the floor near her sister's body, according to Wells.

Kerby Revelus then began attacking Sarafina with the knife, Wells said, prompting police to open fire and kill him.

On Tuesday, the two slain siblings and their attacker were buried together. Sarafina Revelus returned home Tuesday after undergoing surgery Monday morning for wounds.

It was not the first time police have visited the home answering a domestic violence call, Wells said.

In September 2004, Kerby Revelus was arrested for punching one of his sisters in the face as they fought about money, the chief said. The Boston Herald identified the sibling as Jessica Revelus, who was not in the home during Saturday's attack.

Jessica Revelus told officers at the time that "she was not in fear of her brother," according to a police report from the incident, the Boston Herald reported. A charge of domestic assault and battery was dismissed because she refused to cooperate, Wells said.

Kerby was then in his last year at Milton High School.

But Kerby was in trouble a year later, in 2005, when he was charged with carrying a firearm without a license after he attempted to purchase alcohol at a Randolph, Massachusetts, liquor store. He was given a six-month sentence and was released in September 2008.

CNN reached Jessica Revelus by phone Tuesday. She seemed distraught and said she had not been able to sleep. Her brother's rampage came, she said, "out of the blue."

On Monday, Jessica Revelus told the Boston Herald that "I was never afraid of him. I called the police because he thought he was so big and bad."

Jessica Revelus told the newspaper that her sister Samantha "would get into arguments" with Kerby over "little stuff" and that Kerby and her father were not speaking.

Police are unclear about what set the brother off Saturday, and Wells said he's being careful not to speculate.

Vronze and Regina Revelus said through a family spokesman that they had "no explanation" for their son's savagery, according to the Boston Herald.

"How much can you put on the shoulders of one family?" Wells asked.

Wells praised the first officer on the scene Saturday.

"I don't have words to articulate how this officer maintained his ability to do his job, " he said. "To go in and witness that first thing, just as he opens the door and stay on his radio through the whole thing ..."

He added that the horror of the day rippled through the force. "You can bet that our officers went home after this, and they hugged their wives and their children that much tighter. I hope that for this family and for my officers, that there can be a way to get through.

"We are going to try to make them whole as soon as possible, even though the events of this past weekend will stay with them forever."

All About Domestic Violence