Ohio man seeks trial over getting DUI on motorized barstool

(CNN) -- An Ohio man says he is seeking a jury trial on a charge of driving under the influence that was slapped on him after he crashed the vehicle he was piloting -- a barstool. 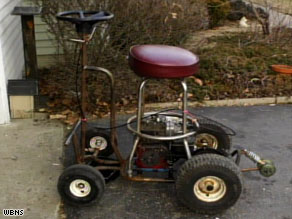 The barstool was welded to a small metal frame attached to a five-horsepower lawnmower engine.

"It was just an accident. I mean a little minor accident," Kile Wygle, 28, explained in an interview this week with CNN affiliate WSYX.

His homemade vehicle was made from a barstool welded to a small metal frame attached to a five-horsepower lawnmower engine, four wheels and a lawnmower steering wheel, according to the Newark, Ohio, police accident report.

Officers responding to a report of a crash with injuries March 4 said they found Wygle nursing his injuries and highly intoxicated. According to the police report, when asked how much he had had to drink, Wygle responded, "a lot."

He crashed during his attempt at a U-turn while speeding down the street in front of his home -- a daring move from atop the specialized barstool even for the most nimble and sober of men. Measuring 6-foot-1 and 230 pounds, and after having consumed what he later told an officer was 15 beers, Wygle appeared to be neither.

He was treated at a hospital for minor injuries.

According to the police report, Wygle claims his unique vehicle can reach a speed of 38 miles per hour, though at the time of the crash he was going around 20.

He entered a plea of not guilty.