ROME, Italy (CNN) -- The Italian media call her "Foxy Knoxy," portray her as a "devil with an angel's face," and there are 11 Facebook pages dedicated to her, all in Italian. 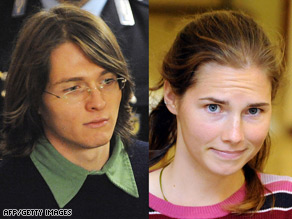 Amanda Knox, 21, is an American college student from Seattle, Washington, who is on trial for murder in Perugia, Italy. The case has given Knox almost pop star status there.

She was voted the top woman in an online "person of the year" poll by an Italian TV channel in December, beating out Carla Bruni, the Italian-born French first lady.

Seven of the 11 Facebook pages champion her innocence; four seem convinced that Knox is pure evil. A sampling of comments: "No to Amanda. No to her superstardom" ... "She's a sociopath" ..."Everyone is not sure if she is guilty or not and that she will lead us to a new existential awareness. Please shout with me your anger. ... Let's say no. Let's say Knox."

Knox and former boyfriend Raffaele Sollecito, 24, are charged with murdering and sexually assaulting one of Knox's roommates, British exchange student Meredith Kercher, on November 1, 2007. They insist they are innocent and are disputing the allegations.

Knox and Sollecito are due back in court today. The last time Knox appeared before the panel of eight judges, she wore a T-shirt quoting The Beatles: "All you need is love."

Prosecutor Giuliano Mignini alleges that Kercher, 21, was killed because she refused to participate in a drug-fueled sex game played by Knox, Sollecito, and a third man, Ivory Coast native Rudy Hermann Guede. In court papers, prosecutors stated that Sollecito held Kercher by her wrists while Knox poked at her with a knife and Guede sexually assaulted her.

The case is being tried in Perugia, a university town about 115 miles north of Rome that is better known for its chocolate than for its scandalous murder trials.

According to the prosecutor's office, Kercher had been in Italy for two months as part of a year-long course with Leeds University, where she was working toward a degree in European Studies. She shared a house with Knox, a University of Washington student in the same exchange program, and two Italian housemates.

The crime scene, which has become a tourist attraction, has been broken into twice, police say.

Knox and Sollecito were arrested November 6, 2007, and were kept in prison while an investigation continued. The judge overseeing the investigation found both were capable of committing the crime again, fleeing the country or tampering with the evidence.

Police sought charges in July 2008, and they were ordered to trial in October. The trial began January 16 and has been held mostly on weekends.

Italian newspapers assigned their top crime reporters, and the case has received unprecedented international coverage. Knox has appeared on the cover of People magazine, which shares a corporate parent with CNN.

A random sampling of women on the streets of Rome showed that all of them had heard of the case and most believed Knox and Sollecito were at the very least implicated in the slaying.

The superheated publicity surrounding the case helped make Knox a household name in Italy. She is usually portrayed as a femme fatale. Consider these headlines:

• "Sex, lies and stabbings"
• "Lovers without any inhibitions"
• "And in prison, she even tries to sun tan"

Italian journalists also have plastered their newspapers with photos they found of Knox on the Internet, especially images that showed her as a "wild girl." They pounced on the "Foxy Knoxy" nickname they found on her MySpace page, even though her parents later explained the high school moniker came from the way Knox played soccer, quick like a fox.

Although Italian law limits the publication of court and police records, the media ban is less strict than in many European countries. While it is not exactly legal to publish police investigative reports, no journalist has gone to jail in Italy for doing it.

Among the items leaked: Knox's diary, various police interrogations, photos of Kercher's body, video of Kercher's body (which wound up on YouTube but has been pulled), and video of the Italian forensic police carrying out their investigation. Eventually, even the leaks made headlines, leading to more speculation.

Knox can do no right in the Italian media. If she appears reserved and timid in court, she is portrayed as someone with plenty to hide. If she smiles or laughs in court, she's called disrespectful. As far as the Italian media is concerned, Knox is the mastermind who manipulated those around her and seduced her Italian boyfriend and led him astray.

While Knox and Sollecito's preliminary hearings were being held in October, Guede was convicted of murder after a fast-track trial. His lawyers had hoped that the speedy resolution of the case would give him a break at sentencing. He got 30 years in prison.

According to testimony at Guede's trial, his fingerprints were found in the house, and his DNA was linked to Kercher's body. He has never denied being in the house the night of the slaying but insists he didn't kill her. He says he had an "appointment" with her that night and was in the bathroom when she was killed.

Sollecito and Knox say they weren't at the house the night of the slaying. They say they both were at Sollecito's house. But the alibi has been contradicted by witnesses at the trial.

Eighty-six media outlets sent 140 journalists to cover the opening of the trial in January, but publicity has waned since then. The Italian 24-hour news channel TG24 no longer breaks into its programming with multiple updates. Knox, for now, has been relegated to the pages preceding the sports or weather report.

But Italians love their murder cases, and attention has shifted to other crime news. A mother is accused of killing her toddler son, a husband and wife are accused of multiple killings. Their courtrooms are now filled with spectators who wait in line an hour or more.

The Perugia courtroom still is packed, but the long line is gone. That is likely to change, however, as testimony shifts to the defense case.