NEW YORK (CNN) -- Nicole Ganguzza was a newlywed in grad school at the University of Central Florida when she was dragged off a trail and strangled to death while jogging in a park in June. 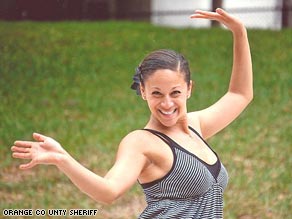 Nicole Ganguzza, 26, was studying to be a family therapist at the time of her death.

Ganguzza, 26, was close to earning her master's degree in marriage and family therapy. She was looking forward to having children of her own.

She left class on June 10 at about 5:35 p.m. Ten minutes later, she called husband Brendan Ganguzza and told him she was going jogging at Jay Blanchard Park, not far from the university's campus in Orlando, Florida.

Brendan Ganguzza became worried at about 7 p.m. when he couldn't reach his wife on her phone. He searched the park for two hours, calling police at about 9 p.m.

Police combed the brush through the evening, and the search the next day grew to 60 people. Her body was found behind the post office, about two miles from where her Mitsubishi Eclipse was parked and just off the Econlockhatchee Trail where she'd been jogging.

Watch for the clues »

Brendan Ganguzza became a widower at 30. He is working hard to keep her memory alive.

"It's hard sometimes because you can feel very much in the dark about what is going on, wondering if you'll ever get answers," he told CNN.

"We've started a foundation in Nicole's name to continue her dream of providing free counseling and therapy to those who can't afford it. She was studying to be a counselor," he added.

Nicole Ganguzza was killed five days before toddler Caylee Anthony was reported missing. That case grabbed the headlines in Orlando -- and beyond.

Writing recently about the charitable foundation established in Nicole Ganguzza's name, an Orlando Sentinel columnist described her as "the anti-Casey."

Police say her killer deliberately hid her body in the brush along the trail. Investigators believe the killer either is from the area or is very familiar with the park and nearby campus.

The Orange County Medical Examiner characterized Ganguzza's death as a homicide by strangulation without elaborating. It is not publicly known whether she had been sexually assaulted.

"We are keeping very quiet about this because this is information that only the killer would know," said Orange County sheriff's spokesman Carlos Padilla.

Last week, Ganguzza's family and friends asked anyone with information to come forward and help solve this cold case. They expressed relief that the police may have a break in the case and that an arrest could come soon.

"I just hope they make an arrest soon in my wife's case, so they can get this dangerous guy off the streets," Brendan Ganguzza said.

Police executed a search warrant two weeks ago on the mobile home of a man who is considered a person of interest in the case. His home lies along the Econlockhatchee Trail.

He is a former student and employee of the University of Central Florida. Police say that after reviewing tips and leads, they believe they have probable cause to investigate this individual further.

"The search warrant is sealed, and I can't say at this time what evidence was collected or what led us to this individual," said Cpl. Susan Soto, a spokeswoman for the Orange County sheriff.

Police are being tight-lipped about whether Ganguzza's attacker left behind any DNA or other forensic evidence.

Police are still asking for the public's help in solving this case. If anyone has any information please call Crime Line at 1-800-423-TIPS. A reward of up to $5,000 is being offered for information on the Nicole Ganguzza homicide case.