(CNN) -- At least three police officers in Oakland, California, were shot and killed Saturday afternoon after a man pulled over for a routine traffic stop opened fire and then battled SWAT officers at a nearby building, police said. 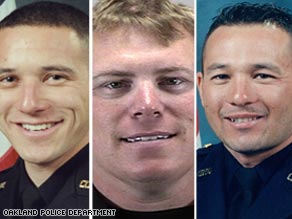 The man, a 26-year-old Oakland resident, was later fatally shot in a shootout with a SWAT team in an apartment complex where he hid.

Authorities discovered the alleged gunman, 26-year-old Lovelle Mixon, had an extensive criminal history. At the time of the shooting, he was in violation of parole for assault with a deadly weapon, police said.

The incident began about 1 p.m. in east Oakland when two motorcycle officers tried to pull over a car for a "fairly routine traffic stop," said Dave Kozicki, the deputy police chief.

Immediately afterward, emergency call dispatchers received reports that two officers were down at the scene and needed attention. They had been shot, Kozicki said.

The first victim, Sgt. Mark Dunakin, 40, died, police said. He had been with the force for 18 years. The second officer, John Hege, 41, remained in critical condition.

Soon after the first shooting, police began an intense search for the gunman. An anonymous caller directed authorities to a building on an adjacent street where the gunman was believed to be barricaded, said acting Police Chief Howard Jordan.

The two police officers killed were Sgt. Ervin Romans, 43, and Sgt. Daniel Sakai, 35. Romans had been with the department since 1996; Sakai since 2000.

A third officer, grazed by a bullet, was treated and released, said police spokesman Jeff Thomason.

"We come together in shock, in grief, in sadness and sorrow at a set of tragic incidences," said Oakland Mayor Ron Dellums.

Schwarzenegger said flags at the state capitol will fly at half-staff to honor the fallen officers.

"This is a tragic day for law enforcement officers everywhere," he said in a statement.

All About Oakland Police Department