(CNN) -- Thirteen Galveston, Texas, police officers have been disciplined in connection with a brawl last year between officers and wedding guests. 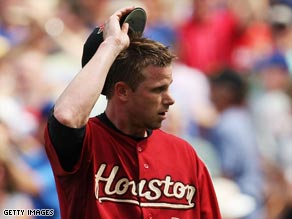 Houston Astros pitcher Brandon Backe was among the wedding guests arrested in the brawl.

The fracas led to the arrest of 13 people, including Houston Astros pitcher Brandon Backe.

Nine officers will be suspended, with the lengths of time ranging from two to seven days, and four will receive written reprimands in connection with the October 5 disturbance.

The disciplinary actions stem from the violation of Galveston police administrative procedures, which stymied investigators trying to determine whether rules about the use of force had been violated.

In the end, police said, the officers heeded the department's rules on the use of force but not on recording details of what happened.

The incident centered around the drunk and disorderly behavior of Daniel Cole O'Balle, 19, who had been attending his sister's wedding at a convention center, police said.

During the wedding reception, O'Balle became inebriated and at the end of the reception, "instigated a confrontation" with a security guard when he tried to take beer from the center, police said. The guard later spotted O'Balle with a beer at the San Luis Hotel bar H2O and called police, authorities said.

O'Balle "was, in violation of Texas law, permitted to consume alcoholic beverages to the point of becoming highly intoxicated," police said. O'Balle's attempts to take beer from the convention center was also in violation of the law, authorities said.

"This comprehensive review has revealed that this incident, and the resulting arrests, was instigated by the actions of a single individual. This individual exercised extremely poor judgment and, if he had been properly supervised by his parents and not allowed to violate the law, this incident likely could have been avoided in its entirety," police said in a news release announcing the disciplinary action.

Under Texas law, a minor can consume alcohol "if they are in the visible presence of, and have the consent of their adult parent, legal guardian or spouse."

Police said O'Balle became "belligerent" when an officer confronted him and that he became "aggressive toward and noncompliant with" the officer. More officers showed up and others with the wedding party interfered to keep officers from arresting O'Balle, who threw punches at the officers, police said.

KHOU said Backe was charged with interfering with a police officer. A mug shot of the Astros pitcher shows bruises on his face.

Police gave the following account of what happened, based on an internal investigation:

"When Lt. Joel Caldwell arrived, he determined that the crowd was so out of control that it was necessary to clear the bar to re-establish order. Accordingly, Lt. Caldwell ordered a tactical crowd control line was formed to clear the bar.

KHOU said police charged O'Balle with three counts of assault on a public servant and one charge of retaliation.

Police said arrests were "based on probable cause" and that any force they used was a proper reaction to confront "resistance or interference."

"No officer was found to have violated any departmental policies related to any arrest or any use of force," police said.

The disciplinary actions are the result of an internal investigation in which 70 witnesses, suspects and officers were interviewed, documentation was examined and video was produced. Police investigators said "insufficient and inadequate reporting" by officers complicated their review of the case.

There were failures by some officers and supervisors "to properly file affidavits, supplemental reports, booking reports, use of force reports and arrest warrants."

The 13 disciplined officers also will be getting remedial training in documentation and reporting.

"The investigators also determined that these paperwork failures, all of which occurred after the incident and related arrests, did not cause or contribute to the events in question or lead to any improper conduct by any officer in their responses to the situation presented by O'Balle and the others who were arrested," according to police.

All About Police • Galveston • Houston Astros