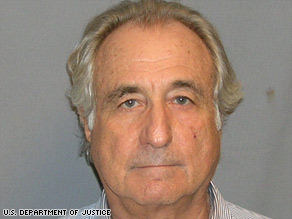 Madoff is in jail at the Metropolitan Correctional Center in lower Manhattan after pleading guilty to operating on the largest Ponzi schemes in history.

He faces 150 years in prison when he is sentenced June 16.

Many of the assets are held in the name of Madoff's wife, Ruth. That should not prevent the government from seizing them, said former federal prosecutor Bradley Simon of Simon & Partners.

"Since she was in the business, too, it's going to be hard to show these assets came from another source other than through the business," said Simon. "It's pretty easy to show this property derived from the proceeds of the illegal activity. They'll be able to take every nickel from him."

The targeted assets include:

• A Manhattan condominium valued at $7 million on East 64th Street, where Madoff was under house arrest for three months before his guilty plea.

• Homes in Montauk, New York; Palm Beach, Florida; and Cap d'Antibes, France, as well as "all insured and readily salable personal property" contained in the homes.

• A yacht named Bull, docked in France; three other boats and four automobiles: two Mercedes, one BMW and one Volkswagen.

Madoff defense attorney Daniel Horowitz said he had no comment.

Madoff's lawyers listed the assets in court papers filed Friday. They estimated his worth at up to $826 million. His business has an estimated worth of $700 million, according to the documents.

Madoff was ordered to jail Thursday after pleading guilty to 11 criminal counts, admitting operating a Ponzi scheme estimated to have bilked thousands of investors out of billions of dollars.