LAREDO, Texas (CNN) -- Rosalio Reta sits at a table inside a Laredo Police Department interrogation room. A detective, sitting across the table, asks him how it all started. 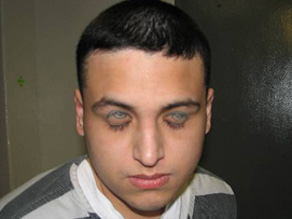 Gabriel Cardona, who shows his tattooed eyelids, worked as a hit man for a Mexican cartel.

Reta, in Spanish street slang, describes his initiation as an assassin, at the age of 13, for the Mexican Gulf Cartel, one of the country's two major drug gangs.

"I thought I was Superman. I loved doing it, killing that first person," Reta says on the videotape obtained by CNN. "They tried to take the gun away, but it was like taking candy from kid."

Rosalio Reta and his friend, Gabriel Cardona, were members of a three-person cell of American teenagers working as cartel hit men in the United States, according to prosecutors. The third was arrested by Mexican authorities and stabbed to death in prison there three days later.

In interviews with CNN, Laredo police detectives and prosecutors told how Cardona and Reta were recruited by the cartel to be assassins after they began hitting the cantinas and clubs just across the border.

Watch how the teens turned into drug cartel hitmen »

CNN has also obtained detailed court records as well as several hours of police interrogation videos. The detective sitting across the table from Reta and Cardona in those sessions is Robert Garcia. He's a veteran of the Laredo Police Department and one of the few officers who has questioned the young men.

"One thing you wonder all the time: What made them this way?" Garcia told CNN. "They were just kids themselves, waiting around playing PlayStation or Xbox, waiting around for the order to be given."

Over a nearly one-year period starting in June 2005, the border town of Laredo, Texas, saw a string of seven murders. At first glance, the violence looked like isolated, gangland-style killings. But investigators started suspecting something more sinister.

Then Noe Flores was gunned down in a clear case of mistaken identity. Investigators found a fingerprint on a cigarette box inside the suspected shooter's get-away car. That clue unraveled the chilling reality and led police to arrest Gabriel Cardona and Rosalio Reta.

Prosecutors say they quickly discovered these two teenagers were homegrown assassins, hired to carry out the dirty work of the notorious Gulf Cartel.

"There are sleeper cells in the U.S.," said Detective Garcia. "They're here, they're here in the United States."

The cases against Cardona and Reta -- both are in prison serving long prison sentences for murder -- shed new light into the workings of the drug cartels.

Prosecutor and investigators say Reta and Cardona were recruited into a group called "Los Zetas," a group made up of former members of the Mexican special military forces. They're considered ruthless in how they carry out attacks. "Los Zetas" liked what they saw in Cardona and Reta.

Both teenagers received six-month military-style training on a Mexican ranch. Investigators say Cardona and Reta were paid $500 a week each as a retainer, to sit and wait for the call to kill. Then they were paid up to $50,000 and 2 kilos of cocaine for carrying out a hit.

The teenagers lived in several safe houses around Laredo and drove around town in a $70,000 Mercedes-Benz.

As the teens became more immersed in the cartel lifestyle, their appearance changed. Cardona had eyeballs tattooed on his eyelids. Reta's face became covered in tattoo markings. (Prosecutors say during his trial Reta used make-up to cover the facial markings.) And both sported tattoos of "Santa Muerte," the Grim Reaper-like pseudo-saint worshipped by drug traffickers.

"These organizations, these cartels, they function like a Fortune 500 company," Webb County, Texas, prosecutor Uriel Druker said. "We have to remember that the United States is the market they are trying to get to."

In Cardona's interrogation tape, there are clues that "Los Zetas" are reaching deeper and deeper into the United States. Cardona is asked, "Where else are the Zetas?" And Cardona responds, "I've heard in Dallas and Houston."

And that's why the cartel recruited these young Americans. Cardona and Reta could move freely and easily back and forth across the border with Mexico.

Just hours before they were arrested, federal authorities taped a phone conversation between them in which Cardona brags about killing 14-year-old Inez Villareal and his cousin, a Cardona rival.

Cardona laughs as he describes torturing the two boys and dumping their bodies in large metal drums filled with diesel fuel. He says he made "guiso," or stew, with their bodies.