Gunman in Alabama slayings was briefly a police officer

GENEVA, Alabama (CNN) -- The gunman who authorities said launched a shooting rampage over three south Alabama towns, slaying 10 people in his path before killing himself, was once a police officer in Samson, the small town hit hardest by the deadliest crime in the state's history. 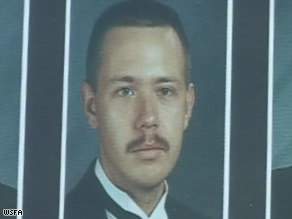 Authorities identified the shooter, seen in a yearbook photo, as Michael McLendon, 28, of Kinston, Alabama.

Authorities identified the shooter as Michael McLendon, 28, of Kinston, Alabama, in Coffee County. Speaking at several news conferences on Wednesday, authorities also released a detailed timeline of the rampage -- which lasted less than an hour -- and identified the victims.

Investigators late Wednesday said they were closer to finding a motive behind why McLendon would fatally shoot his mother in his hometown of Kinston before moving on to open fire in Samson and then Geneva.

"Evidence collected does indicate his reasons -- what the reason are I can't get into right now," said Lt. Barry Tucker of the Alabama Bureau of Investigations. "He was somewhat depressed about job issues, but the information we have does not specify [the motive] was job-related."

Coffee County District Attorney Gary McAliley told the newspaper in nearby Dothan that McLendon likely planned the rampage for a while. He said investigators have found dozens of ammunition boxes, military and survival gear and medical supplies at McLendon's Kinston home.

The Alabama Bureau of Investigation said authorities recovered a phone list and a notebook from the home, "but there is no evidence that indicates a hit list of any kind."

Tucker said the notebook contained, "a couple of pages of notes, people he worked with, places he worked -- it was over a year old." Asked whether the notes expressed grievances against others, Tucker said no.

The assault Tuesday ended at the Reliable Metal Products plant in Geneva, 24 miles from Kinston. Police said McLendon engaged in a shootout before killing himself inside the building.

McLendon shot and killed at least 10 people, including two children, and wounded at least four others, officials said.

McLendon, who had no known criminal record before carrying out the rampage, worked briefly as a police officer in Samson, but failed to complete the "required training" at the police academy in Montgomery in 2003, according to Alabama State Trooper Capt. Marc McHenry.

He "didn't last a week and a half" at the academy and received no firearms training there, Murphy said.

"We believe he fired in excess of 200 rounds during the assaults," Alabama State Police Cpl. Steve Jarrett said.

See photos of the shooting scenes »

The rampage began Tuesday afternoon when McLendon shot and killed his mother before setting fire to the home he shared with her in Kinston, near the Alabama-Florida state line. He then headed to Samson, where he opened fire on his uncle's front porch as his uncle and other relatives stood outside with the neighbors from across the street.

Those neighbors happened to be the family of Geneva County Sheriff's Deputy Josh Myers, who was later involved in a shoot-out with the gunman, unaware that McLendon had shot and killed his wife and young daughter and critically injured his nearly 4-month-old baby, Ella Kay.

Five people, including Myers' wife, Andrea, and their 1½-year-old daughter, Corinne Gracy, were killed on the porch. McLendon then opened fire on his grandmother, who was standing in the doorway of her home next door.

Alina Knowles was in her home in Samson when she heard the gunman fire on the porch so many times that it sounded like a horror film.

After the shooting stopped, Knowles saw the gunman flee the area and drive around the block.

Knowles, a certified nurse assistant, looked around for survivors. She saw members of Myers' family dead on the porch, but nobody's chest was moving to signal they were alive.

"[I] picked her up, came between the two vehicles," she said. "Saw him coming up the road, ducked so he wouldn't see me, as he was coming up this way I ducked, was still ducking and moving around their van trying to keep him from seeing me with that baby."

Knowles said she knew if she wasn't careful, the gunman would target her.

Knowles was able to get the deputy's child and herself to safety. But the horror of the events sticks with her.

"I was scared," she said. "The scene I saw, there was no words for it. None at all. There is no describing what I saw."

McLendon then shot and killed two bystanders in Samson before heading to Reliable Metal Products. There, he exchanged fire with Myers and another officer in the parking lot before entering the building, where he shot and killed himself.

"We truly are shocked at this," said Col. Christopher Murphy, the director of the Alabama Department of Public Safety. "This event formed the single deadliest crime recorded in Alabama."

Samson Mayor Clay King said he knew McLendon and all of the victims in the small southern Alabama town.

"I coached him in both T-ball and Little League baseball along with my two sons," he said of McLendon.

He quit his job last week, the company said. The company didn't specify what his position was, but said he was a "reliable team leader" who was well-liked.

Smith represents Geneva County, where all but one of the victims were killed. Smith said she had been briefed about the incident by state and local law enforcement.

CNN's Saeed Ahmed and Dave Alsup contributed to this report.