As gunman roamed streets, neighbor rushed to save infant

SAMSON, Alabama (CNN) -- Alina Knowles anxiously crept along her neighbor's porch, where the bodies lay strewn on the blood-covered floor. 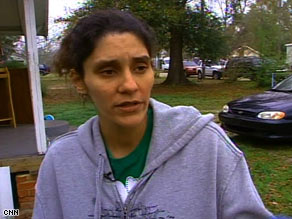 Alina Knowles dismissed any talk of being a hero, saying her neighbor would have done the same for her.

And then she heard the baby's wail. The infant was covered in blood, but she was crying.

"I'm glad she was crying -- I knew she was alive," Knowles told CNN Wednesday, just a day after her neighbors were gunned down in the middle of a shooting spree over two south Alabama towns.

"There was blood everywhere, I couldn't tell where the bleeding was coming from," said Knowles, a certified nurse's assistant. "Her mother's blood was on her."

Just minutes before, Knowles had heard the rapid fire of gunshots from her home next door in the Samson neighborhood as 28-year-old Michael McLendon methodically shot dead five people, including two children, on the front porch of his uncle's home on West Pullum Street.

Among the dead were the wife and and toddler of Geneva County Sheriff's Deputy Josh Myers.

The couple's 4-year-old son was found hiding in the Myers' home after the shooting.

Knowles scooped up Myers' crying 3-month-old daughter and ducked behind a minivan as McLendon cruised down an adjacent street, still firing at people.

McLendon was "very workmanlike, like he was on a mission," Knowles said. "It really sounded like you were in a war zone."

The 28-year-old gunman would kill three more people, including his 74-year-old grandmother, before heading to Geneva, where he would ultimately take his own life in a standoff with police. Eleven people died in the rampage, which lasted less than an hour and started with the killing of his mother in neighboring Coffee County.

Knowles cleaned off the baby as she anxiously awaited an ambulance and authorities. She found a wound on the baby's leg.

"I was crying the whole time," she said, recalling that she scurried to a neighbor's brick home where she felt safe amid all the gunfire.

A mother of two, Knowles has since spoken to deputy Myers, who was involved in the shootout at the Reliable Metal Products plant a few miles away in Geneva before he even realized his wife, Andrea, and 1 1/2-year-old daughter, Corinne Gracy, were among McLendon's victims.

"He thanked me 'for saving my baby girl,' " Knowles said, dismissing any notion of being a hero. Myers would have done the same for her, she said.

A day after Tuesday's shootings, Myers stood in front of his home, across the street from the house where his family members were killed, and spoke to reporters.

"It's supposed to be me out here getting shot, not my family," Myers said, speaking barely above a whisper.

Meanwhile, Knowles is haunted by the scene on the porch and misses her neighbors, whom she considered friends.

CNN's Sean Callebs in Samson, Alabama, contributed to this report.

All About Murder and Homicide • Shootings