Deputy: 'It's supposed to be me getting shot, not my family' 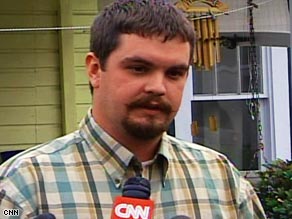 Geneva County Sheriff's Deputy Josh Myers quickly hung up the phone after he got his friend's message on Tuesday and started for the town of Samson, having no idea what had happened to his wife or his three children.

Then, another urgent message:

"We got notified on the radio that a trooper was chasing a suspect that had fired shots," Myers told reporters on Wednesday.

Instead of heading home, the deputy drove to Reliable Metal Products plant in the nearby town of Geneva, where he engaged in a shoot-out with the suspect, who then entered the building and shot and killed himself.

Myers had no idea that 30 minutes earlier, the suspect had shot and killed his wife and 1½-year-old daughter, Corinne Gracy, and shot and wounded his 3-month-old baby girl, Ella Kay.

They were victims of the bloodiest rampage in Alabama's history, carried out by Michael McLendon, who killed 10 people before turning one of his guns on himself.

"He was present when it happened," Myers said. "He knows something's wrong. He asked where mama was, and I had to tell him she was with Jesus. This is going to take a long time to work through it."

Andrea Myers, 31, was holding Ella Kay and talking with her neighbors on their porch across the street when the gunman -- identified by police as Michael McLendon -- opened fire. The neighbors turned out to be McLendon's relatives, although it was unclear why he targeted them.

"She ran up on the porch and got my baby girl and took her to safety," Myers said.

Knowles said she scooped up Myers' crying 3-month-old daughter and ducked behind a minivan as McLendon cruised down an adjacent street, still firing at people. Read Knowles' full account

The 10 people McLendon killed before he shot himself to death included his mother, grandmother, other relatives and strangers.

Ella Kay, who was shot in the leg, will have surgery on Wednesday at a hospital in Pensacola, Florida, to remove the bullet or shrapnel that is near her femoral artery, Myers said.

A day after Tuesday's shootings, Myers stood in front of his home, across the street from the house where his family was killed, and spoke to reporters.

"Nobody's family should have this done," he added, holding pictures of his wife and daughters.