DULUTH, Georgia (CNN) -- Neither the on-the-field fame nor the off-the-field notoriety of former Atlanta Falcons quarterback Michael Vick was enough to spark a bidding war for his suburban Atlanta mansion Tuesday. 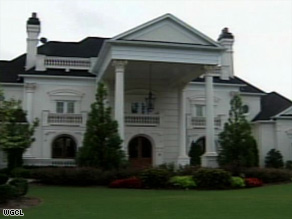 The multimillion-dollar home in Duluth was on the auction block Tuesday, but just three real estate agents showed up -- and one of them, Lance Hempen of Funari Realty, was a listing agent who had no clients interested in the property.

No one offered a bid, so the auction ended before it began.

Vick, 28, is serving a 23-month sentence after pleading guilty in August 2007 to a federal conspiracy charge of bankrolling a dogfighting operation at a home he owned in Virginia. He is expected to be released early, possibly in May, and to serve the final two months or so of his sentence under home confinement, most likely in Virginia.

No dogfights occurred in Duluth, 40 miles northeast of Atlanta.

The home, in the upscale Sugarloaf Country Club community, has been on the market for more than a year. It has eight bedrooms, 11 bathrooms, a four-car garage and a movie theater, among other deluxe features.

Narender Reddy of Metro Brokers/GMAC Real Estate said his client offered $3.2 million for the home two months ago, but the auction organizers said they wanted to see whether someone would offer more. Reddy said his client withdrew the bid but remains interested.

"Why would I let them use my offer as a benchmark?" Reddy asked. "I wanted to see who was going to bid and what were they going to offer."

He will advise his client to offer less money now, Reddy said.

Seema Jain of Virtual Properties Realty also was on hand. She said that she has interested buyers but that they didn't want to bid if there was no competition.

The next step is to be determined by the bankruptcy judge in Virginia who ordered the sale.

Reddy said the price is too high for today's economy.

"It is the economy that is dictating the price of the houses, and I'm sure most of the people still think $3.2 million ... is higher than what the market can fetch," he said.

Jain said no one seems turned off by Vick's reputation.

"Nobody cares about who owns it. It's just the product and the location," she said.

Reddy said the home is "well-built, has a lake view and an excellent floor plan."

CNN's Amanda Moyer and Deb Krajnak contributed to this report.