(CNN) -- The suspect accused of killing a minister at an Illinois church had marked the day of the attack as a "day of death" or "death day" in a planning book, a prosecutor said Tuesday. 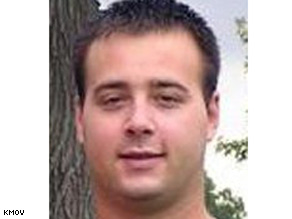 Terry J. Sedlacek, shown in a family photo, has been charged with first-degree murder.

There were "words to those effect," written in a day planner belonging to Terry J. Sedlacek, the man accused in Sunday's attack at the First Baptist Church in Maryville, Illinois, said William Mudge, the Madison County state's attorney.

Mudge said he hadn't seen the planner and could not recall the exact wording that police described to him. He said police found the book in Sedlacek's home.

Lt. Scott Compton of the Illinois State Police said he hadn't seen the planner and could not confirm Mudge's account.

Authorities have charged Sedlacek, 27, with first-degree murder in the killing of the Rev. Fred Winters. He also was charged with two counts of aggravated battery related to the stabbing of church members Terry Bullard and Keith Melton.

Sedlacek was seriously wounded in the melee, authorities said.

Melton, one of the two church members stabbed in the attack, described the scene that erupted during Sunday service.

Winters had been preaching for a while when the gunman approached him, Melton told CNN.

"It just seemed a lot out of place for someone to be walking to the front to take a seat at that point in the service," Melton said.

Winters stopped his sermon and asked the man what he could do for him, Melton said.

The assailant fired a weapon and hit the pastor's Bible, causing "confetti" to fly into the air, Melton recalled.

"It was a bit confusing just at first," Melton said, adding that he could see from the pastor's reaction that what happened was not part of the service.

Melton was one of two men who first jumped the assailant, he said.

"By the time the second shot rang out, there were a number of us who sprang into action," Melton said.

Winters jumped off the stage, Melton said, and was met by the gunman. The two wrestled and more shots rang out.

The attacker's .45-caliber weapon jammed at that point, authorities said.

The assailant tried to get away but was subdued by church members, some of whom blocked the entrances while others grappled with the gunman.

"There were men everywhere," Melton said.

It was minutes before Melton realized he had been stabbed, he said, attributing the delay to adrenaline.

He was treated and released from a local hospital. Bullard, another church member, also was stabbed in the attempt to subdue the gunman.

Sedlacek is being treated at a hospital after suffering serious knife wounds.

"When he was tackled by two of the members, we don't know whether he fell on the knife, injuring himself at the time, or whether [his injury] was self-inflicted during the struggle," said Illinois State Police Director Larry Trent.

Trent said police are trying to determine a motive, noting that church members did not recognize the gunman.

In August, the St. Louis Post-Dispatch profiled Sedlacek in an article on Lyme disease, and quoted his mother, Ruth Abernathy, as saying he began acting strangely during his junior year in high school. He seemed confused and stopped participating in activities that had interested him, she told the newspaper. She said a doctor had diagnosed Sedlacek as mentally ill before a battery of tests revealed that he had Lyme disease, according to the paper.

The newspaper reported that even years later, Sedlacek, then 26, had lesions on his brain and was taking several medications, including an anti-seizure drug.

The Post-Dispatch identified him as a resident of Troy, Illinois, in suburban St. Louis.

A spokesman for the Centers for Disease Control and Prevention said Monday that mental illness associated with Lyme disease is highly unusual, and the Infectious Diseases Society of America said Lyme disease "is not known to cause violent behavior."

But a study published in 2002 in the American Journal of Psychiatry and carried out in the Czech Republic found that 36 percent of 900 psychiatric subjects had antibodies to the bacterium linked to Lyme disease, versus 18 percent of 900 healthy control subjects.

The Illinois shooting is believed to be the nation's first in a church since July, when a 58-year-old man opened fire in a Knoxville, Tennessee, church during a children's play. Two people were killed and six wounded in the shooting at Tennessee Valley Unitarian Universalist Church.

See a U.S. map of other recent church shootings »

Jim Adkisson pleaded guilty last month in a deal that allowed him to avoid the death penalty with a sentence of life in prison without parole, court officials said.