(CNN) -- The Baptist minister who was fatally shot Sunday as he led services at a church in suburban Saint Louis, Missouri, was carrying out work he believed in fervently, a church official said Monday. 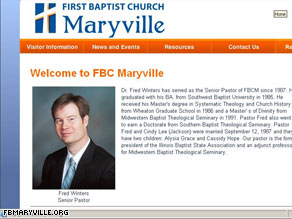 "I believe that he would want us to know that he died doing exactly what he believed passionately about," Worship and Music Pastor Mark Jones told reporters outside First Baptist Church in Maryville, Illinois, about Pastor Fred Winters, who was killed the day before.

Jones expressed gratitude for an overwhelming response from the public that has included more than 1,000 e-mails of support.

They will be compiled "into a huge book of love" to be given to Winters' widow, he said.

Investigators have charged Terry J. Sedlacek, 27, with first-degree murder in the killing.

Sedlacek was further charged with two counts of aggravated battery related to the stabbing of parishioners Terry Bullard and Keith Melton. Their wounds were not life-threatening, said Illinois State Police spokesman Ralph Timmins.

Sedlacek himself was seriously wounded in the melee, Timmins said Sunday.

Asked what led Sedlacek to the church, Jones said, "We're scratching our heads on that one."

Speaking of Sedlacek, Jones added, "Maybe he, too, needs to go back to the Bible and read the book and ask the question, 'Is this really God's word? Do I need to reconsider some things?' "

Watch aftermath of shooting in church »

"The only thing we know is that the suspect said something to the pastor, and the pastor said something back to him -- we don't know what that was," Trent told reporters Sunday. "It was almost as if the pastor may have recognized him, but we're not sure about that at all."

Trent said the gunman's .45-caliber pistol jammed after he shot Winters. The man then pulled out a knife before being subdued by some of the approximately 150 worshippers attending the church in southern Illinois.

Trent said police were trying to determine a motive in the shooting, noting that church members did not recognize the gunman.

Last August, the St. Louis Post-Dispatch profiled Sedlacek in a story it did about Lyme disease.

His mother, Ruth Abernathy, told the newspaper he began acting strangely during his junior year in high school; he seemed confused and stopped participating in activities that had interested him. The newspaper identified him as a resident of the Troy, Illinois, in suburban St. Louis.

Lyme disease diagnosis, effects and treatment has caused disagreement in the medical community.

A spokesman for the Centers for Disease Control and Prevention said Monday that mental illness associated with Lyme disease is highly unusual, and the Infectious Diseases Society of America said Lyme disease "is not known to cause violent behavior."

But a study published in 2002 in the American Journal of Psychiatry and carried out in the Czech Republic found that 36 percent of 900 psychiatric subjects had antibodies to the bacterium linked to Lyme disease, versus 18 percent of 900 healthy control subjects.

The Illinois shooting is believed to be the nation's first in a church since July, when a 58-year-old man opened fire in a Knoxville, Tennessee, church during a children's play. Two people were killed and six wounded in the shooting at Tennessee Valley Unitarian Universalist Church.

Jim Adkisson told police he targeted the church because of its "liberal teachings," according to court papers. Adkisson pleaded guilty last month in a deal that allowed him to avoid the death penalty with a sentence of life in prison without parole, court officials said.