(CNN) -- Churches can stop a shooter or anyone else intent on harming church members with the proper security measures in place, an expert on protecting places of worship said Monday. 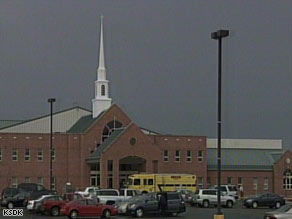 "A church is not helpless when they have a plan, and properly trained security," said Jeff Hawkins, the executive director of the Christian Security Network.

First Baptist Church in Maryville, Illinois, had a security plan in place when a gunman walked into services Sunday morning and killed Pastor Fred Winters, said Tim Lawson, another pastor at the church.

Lawson told CNN he was not prepared to disclose details of his church's security plan on Monday.

But Maryville police Chief Rich Schardam said Winters was keenly aware of the security issues, had sought out police advice and had identified police and medical personnel in the congregation who could help in an emergency.

"They did have plans on what to do," Schardam said Monday.

Schardam said neither of the men who subdued the gunman had a law enforcement background.

Schardam said the suspect in Sunday's shooting, 27-year-old Terry J. Sedlacek, had no known relationship to the church or Winters, and random attacks are impossible to anticipate.

Hawkins called the Illinois killing "tragic," but he said in the year or so since the Christian Security Network has been actively training churches, numerous other tragedies have been averted.

"These incidents aren't going to make the news," said Hawkins. "But they are happening everywhere, big city or small town."

Hundreds of church leaders have told him about all kinds of attacks they have recently faced, from arsons and burglaries to assaults on members and church leaders. In the first two months of 2009, churches have described more than 140 acts of violence to the Network, he said.

In one incident, congregants noticed a person dressed inappropriately for the weather and acting odd. The man was taken outside and questioned. Under his coat, he had two machetes strapped to his back.

"He said that he had been hearing the devil speaking to him, telling him to cut the pastor's head off," Hawkins said. "There was no struggle, and everything was calm. The man was removed."

Hawkins combined his professional security background with his experience working in a Christian ministry in founding Christian Security Network last year, not long after a gunman killed two people and wounded seven in a Knoxville, Tennessee, church. The shooter attacked children who were performing a musical in front of the congregation.

Violent crime in churches is not tracked, Hawkins said.

"The church is really behind in secular world in terms of planning," he said.

Browse a U.S. map of other recent church shootings »

It's essential that a church must balance having a security presence while still keeping a house of worship open to everyone, he said. "Some churches choose armed guards, some have a much more subtle security presence where you wouldn't even know it's there."

A church should have five security plans in place to deal with evacuation, long-term shelter, medical emergencies, lost or missing children and violent confrontations, he said.

"Every church is different so you need something that is going to work for that particular church's culture and size," he said. "And I think now, especially after September 11, people want to feel secure. They want to know if they bring their family somewhere, it's going to be a safe environment.

"Everyone should approach this realistically and not say, 'This couldn't happen here in church,' because we see it happen all the time."

Dale Annis, founder of Church Security Services, a consulting company that advises houses of worship on security strategies, told CNN in November that his business has been growing for five years.

A bill that would have allowed concealed weapons in Arkansas churches failed to get out of a state Senate committee last month.

Highview Baptist Church in Louisville, Kentucky, has a volunteer security force consisting of at least one armed guard during any given worship service.

"We realized that, as the largest Baptist church in Kentucky, we'd be a little naive to think something would never happen to us," Highview Pastor Randy Record, who is also a police officer, told CNN last year. "We're catching up in an era of terrorism and a church is no different."

All About Illinois • Shootings • Law