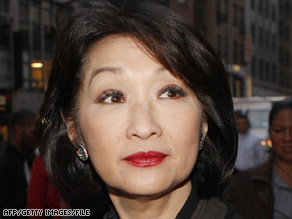 "Stonewalling is what gets politicians in trouble, when they ... try to cover up," Connie Chung says.

It was one of those television moments that linger in the national consciousness, like Barbara Walters sitting down with Monica Lewinsky, Dan Rather with Saddam Hussein, or Jay Leno asking Hugh Grant what the hell he had been thinking.

Chung was with ABC then, and she got the "get" -- the first interview with Gary Condit, the California congressman at the center of the Chandra Levy media frenzy.

The former Washington intern, you'll recall, had been found murdered in Rock Creek Park, and law enforcement sources let it be known that the married Condit had been having an affair with her.

In an interview airing Sunday on "Reliable Sources" (10 a.m. ET, during CNN's "State of the Union with John King"), Chung says she was surprised when Condit refused to acknowledge the romantic relationship.

"Stonewalling is what gets politicians in trouble, when they stonewall or they try to cover up," she says.

"I think that the general public and the news media wanted him to be honest, and if he could be honest about that part of the story, then he could be -- then he would be believed when he was answering other questions as to whether or not he had anything to do with her disappearance."

I often focus on media excess and media mistakes on the program, but we also try to highlight good journalism. The segment includes two Washington Post reporters, Sari Horwitz and Scott Higham, who cracked the Levy mystery in a 13-part series last year. They did what the D.C. police could not: They identified Ingmar Guandique, an illegal Salvadoran immigrant, as Levy's likely killer. Authorities issued an arrest warrant for the imprisoned suspect this week.

But Horwitz and Higham talk about how they were roundly criticized for resurrecting the case and accused of sensationalizing it. It's clear that Levy's case became a huge deal in 2001 because of the Condit connection.

At the same time, Chung says, "The news media had changed. This was the gradual evolution of what the news media was doing. There was flavor of the week, the story du jour."

The Levy frenzy became the precursor for the missing-women TV melodramas that followed: Laci Peterson, Stacy Peterson, Natalee Holloway. The stories of women who were not celebrities, whom no one had heard of before, became national soap operas because they drove cable and morning show ratings.

At least, in Levy's case, the soap opera appears to be drawing to a close.