ATLANTA, Georgia (CNN) -- Authorities arrested two high school students in suburban Atlanta on Thursday after they were warned that one of the students planned to "do harm" at the school with a weapon, police said. 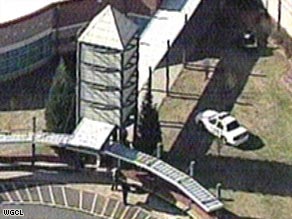 Several schools in Woodstock, Gerogia, were on lockdown after authorities found a gun in a bathroom ceiling.

Sgt. Jay Baker of the Cherokee County Sheriff's Office said Woodstock Middle School, Woodstock High School and Etowah High School were put on lockdown -- meaning no one could enter or leave the buildings -- after authorities learned of the threat.

Police arrested Forrest Busby, 17, at Woodstock High School and found a revolver he is said to have brought to school and hid in the bathroom ceiling, authorities said.

A subsequent search of Busby's home turned up an AR-15 semi-automatic rifle and a Mini-14 assault rifle, as well as 200 rounds of ammunition, Baker said in a statement. Six marijuana plants were discovered in the student's closet.

A 15-year-old student was also arrested in connection with the incident, the statement said.

Baker said another student is being interviewed by authorities but has not been charged in the case.

Busby has been charged with possession of a weapon on school grounds, carrying a concealed weapon and manufacturing and distributing a controlled substance, among other counts.

He's being held without bail at the Cherokee County Adult Detention Center, the sheriff's statement said.

The 15-year-old has been charged as an accomplice on various weapons violations and is being held at the Paulding Youth Detention Center.

The lockdown orders for the schools were lifted after the weapons were recovered, Baker said.

Woodstock is about 30 miles north of downtown Atlanta.

All About Crime • Georgia