Affidavit: Chandra Levy suspect kept her photo in his cell

WASHINGTON (CNN) -- The Salvadoran immigrant suspected in the 2001 slaying of Washington intern Chandra Levy told at least two people he killed her, according to an affidavit filed in the case. 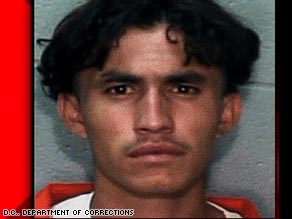 Ingmar Guandique is serving a 10-year sentence for two assaults in the park where Chandra Levy's body was found.

Ingmar Guandique, 27, also kept a magazine photo of Levy in his prison cell, stated the affidavit detailing evidence supporting a warrant for his arrest for first-degree murder.

Guandique is in prison in California for two assault convictions.

Guandique boasted of his ties to the violent Salvadoran gang Mara Salvatrucha, or MS-13, and told witnesses that he was known as "Chuckie" -- the name of a demonic doll in a series of horror movies -- because he had a reputation for "killing and chopping up people," the affidavit states.

D.C. Metro police and federal prosecutors released the affidavit on Tuesday, announcing they would charge Guandique with first-degree murder in the Levy case. He has not been charged with any other slayings.

The affidavit revealed that Levy, 25, fought for her life, scratching her attacker on his face and giving him a "fat lip." Guandique said he received the injuries in a fight with his girlfriend. But the girlfriend later told police that while Guandique struck and bit her at times, she never hit him, the document says.

Guandique is serving concurrent 10-year sentences in connection with attacks on two other joggers in the park during the summer of 2001. He told probation officials the attacks were motivated by robbery, but no valuables were taken from either victim.

Guandique was arrested after the second attack -- exactly two months after Levy's slaying. D.C. Metro police began to take a hard second look at him in 2008, the affidavit shows.

He has repeatedly denied to authorities that he killed Levy, and his public defenders have cautioned against a rush to judgment, citing what they called flaws in the investigation.

The affidavit details a case built largely on circumstantial evidence collected over the eight years since Levy disappeared, apparently while jogging along the Western Ridge trail in Washington's Rock Creek Park. It portrays Guandique as an opportunistic attacker who came up behind female joggers, grabbing them as they were tiring and becoming winded.

The affidavit includes highlights from interviews with a dozen witnesses, who are not identified by name and are instead given numbers. One witness, who frequently exchanged letters with the suspect, told police Guandique had told him as early as 2003 that he killed a young woman in the park. During a taped 2008 phone conversation with the witness, "Guandique acknowledged that he had told W9 about the 'girl who's dead,''' the affidavit says.

Another witness told police that Guandique said he and two male teenagers were sitting on a bench in a park smoking marijuana laced with cocaine when a woman with dark, thick hair jogged by. The witness said Guandique thought she "looked good" and told the two teens that he was going to "get her."

Guandique told the witness that the three followed her along a path, then grabbed her and forced her off the trail. When she started screaming, he grabbed her by the neck and choked her to death, so that other people in the park would not hear her cries for help.

It is not clear from the affidavit whether the two teens Guandique said were with him actually exist. Police have said no other arrests are imminent, but the investigation is continuing.

Levy's skull was found in the park on May 22, 2002 -- more than a year after she disappeared. A search turned up other remains, as well as clothing later identified as hers strewn down the side of a ravine. Her running shoes were unlaced. He clothes were turned inside out, the pants knotted in tight restraints around her legs.

Also among the witnesses are two women who were attacked in Rock Creek Park during the summer of 2001, along with a woman who narrowly escaped her attacker at about 2 p.m. on May 1, 2001 -- about the same time Levy is believed to have been jogging in the park.

All three identified Guandique from photographs as the man who stalked them in Rock Creek Park.

"I do not doubt that he purposely stalked me as a hunter tracks his prey," one of the victims told police, according to the affidavit. The other victim described him as "a bold and practiced attacker," the affidavit said. "He waited until he thought I was fatigued from jogging up a hill and purposefully selected a secluded spot right next to a deep ravine. I fear for other women who may appear to be more vulnerable than I did."

Guandique also allegedly described his methods to one of the witnesses in whom he confided, according to the affidavit.

"Guandique said he would hide on a dirt path and wait for the girl to walk by. He would then lasso the girl around the neck and tie her hands and feet together behind her back to prevent her from scratching or kicking him," the affidavit quotes the witness as saying.

It continues: "After the girl was tied up, he would rape her. Guandique admitted that he did not always know whether his victims were still alive at the end of the attack, but that it did not matter, because they would be eaten by the animals, like coyotes and vultures."

Guandique learned last week from media reports that he would be arrested in the Levy murder case and, according to a witness, responded with an expletive. "They got me now. What am I gonna do?" the witness quoted Guandique as saying, according to the affidavit.

He vowed that he was not "going to go out alone," telling the witness he planned to set a fire with a battery and tissues, then use a homemade handcuff key to escape. He said he would kill the detectives with "shanks," or weapons made in prison.

A search of his cell on February 26 turned up the items he described to the witness, the affidavit says. They included an AA battery, several tissues, a toenail clipper fashioned into a sharp piece of metal, and a device made of a razor blade.

Authorities said Guandique will be brought to Washington in the next 45 to 60 days and formally charged, ending a chapter in one of Washington's most notorious cold cases.

Although the case's notoriety was fed by news reports linking Levy to a married congressman, U.S. Rep. Gary Condit's name does not appear at all in the affidavit supporting the case against the man police want to charge with her murder.