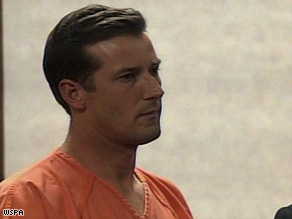 Bruce Windsor listens Friday as a judge tells him he faces kidnapping and robbery charges.

Police say the 43-year-old owner of a real estate company walked into the Carolina First Bank in Greenville, South Carolina, late Thursday with a mask and a handgun.

In court documents filed Friday, police said he forced two bank employees into an office at gunpoint and demanded money. Police arrived minutes later with the suspect still inside, touching off a tense 90-minute standoff before he released the hostages and surrendered.

His actions were "out of character" for a man who has never been in trouble with the law before, friends and relatives said. His tearful sister, defending him as he stood before a judge, said, "He must have just snapped under the pressure."

In his initial appearance for a bond hearing, Windsor was in an orange jail jumpsuit, shackled and with his hands cuffed. In a quiet voice, he answered "yes, sir" as the judge explained the charges to him: two counts of kidnapping, one count of robbery and two counts of pointing firearms at a person, charges that could carry more than 30 years in prison if convicted.

A police detective told the judge Windsor said he had been experiencing financial problems. But police spokesman Cpl. Jason Rampey told CNN they could not yet say for certain whether money problems were the motive for the alleged robbery.

His attorney said in court Windsor had been married for 16 years and was the father of four children. Reports say the oldest is 11. Attorney Sidney Mitchell told the judge he was "a model citizen up until yesterday,' and we've obviously got a lot of talking to do with him," Rampey said.

The judge allowed his family to stand with him during the court appearance. His sister clutched his arm, crying through most of the brief hearing. His wife stood behind him, appearing to rub his back. His pastor at Brushy Creek Baptist Church, where Windsor is a deacon, stood at his side.

His sister told the judge Windsor coaches one of his children's soccer teams and picks them up every day from school.

"He would never, ever hurt his family," she said in a halting voice.

Sobbing, she said, "I can't imagine the desperation that must have caused this." The incident, she said, "doesn't even register." Windsor then spoke up, saying, "I've never stolen anything in my life."

But the judge reminded the court "this is a very serious incident," setting the bail at just over $1.5 million.

On Thursday, SWAT officers surrounded the Carolina First bank as the suspect allegedly made the hostages move with him at gunpoint inside until he surrendered.

Bank owner Art Seaver, who nervously watched the standoff unfold at the scene, met with his employees before they reopened Friday morning for a "time of reflection and a time of healing."

Asked if everything was back to normal, he told CNN affiliate WSPA, "No. What is normal?"

Two different images of Windsor unfolded the day after the incident. The man his pastor called "one of the best fathers I know, anywhere" and the man court documents said "forced the victims to move with him at gunpoint during the attempted robbery. The victims were held by the accuser against their will for over an hour."

Rampey said Greenville's crisis negotiating team just happened to be training on Thursday for hostage scenario when the call came in for the real thing. As SWAT officers took up positions outside, negotiators talked to the suspect, who then allowed the hostages to go.

SWAT officers said in court documents they "challenged the subject at gunpoint" before he lay down on the ground and surrendered. No shots were fired and no one was injured.

All About Law Enforcement • Robbery