(CNN) -- The chief investment officer of the firm headed by financier Alan Stanford, who is accused in an alleged $8 billion fraud scheme, was arrested and charged Thursday in Houston, Texas. 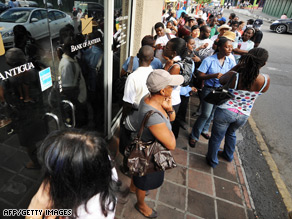 Customers queue outside the Stanford Group-owned Bank of Antigua in St. John's.

Laura Pendergest-Holt, the third-ranking executive of the Houston-based Stanford Financial Group, was taken into custody by FBI agents and charged with obstruction of a government proceeding.

The Justice Department late Thursday said Pendergest-Holt will appear before a federal magistrate in Houston Friday.

The complaint alleges Pendergest-Holt made "several affirmative misrepresentations" to SEC investigators seeking information on what she knew about a scheme to defraud investors and account-holders of billions of dollars in deposits.

The complaint says the executive failed to tell the truth on several occasions during the course of the investigation.

The complaint alleges Pendergest-Holt met in February with several SFG corporate officers in Miami, Florida, to prepare for her upcoming testimony the week before she was scheduled to testify before the SEC.

She allegedly discussed the bank's "Tier III" portfolio, using a pie chart that showed a $1.6 billion loan to a shareholder.

The following week, she made several affirmative misrepresentations under oath in order to obstruct the investigation and failed to reveal she met with SFG corporate officers in Miami to prepare for her testimony.

She also denied she was a member of SIB's limited investment committee, and failed to reveal the extent of what she knew about the bank's Tier III Portfolio, the complaint alleges.

In a second interview, on February 17, she reiterated that she knew nothing of the portfolio, the complaint alleges.

The court document confirms for the first time that the FBI and IRS have been actively conducting a criminal investigation of Stanford's allegedly fraudulent dealings.

"Since June of 2008 I and others on behalf of the FBI, special agents with the Internal Revenue Service, and postal inspectors have been conducting an investigation into allegations that executives of Stanford Financial Group ... have defrauded investors and account-holders of more than $8 billion in deposits," said FBI agent Vanessa Walther in an affidavit filed with the charges against Pendergest-Holt.

"We have been conducting this investigation parallel to an investigation being conducted by the Securities and Exchange Commission," the affidavit says.

Last week, the Securities and Exchange Commission announced civil charges against Stanford, but authorities declined to confirm a criminal investigation also was under way.

All About Stanford Group Company