(CNN) -- Tim Masters squarely blames Fort Collins, Colorado, police and prosecutors for his inability to land gainful employment and for his not having a wife and kids at this stage in his life. 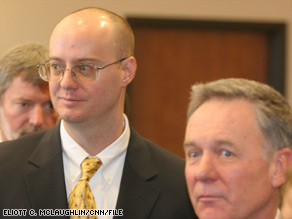 In 1987, Masters became the prime suspect in the slaying of Peggy Hettrick, a 37-year-old found in a field near his house. Among the reasons police said they focused on Masters was that he failed to report the body after he found it and his childhood drawings and stories suggested he was fixated on death.

Masters was convicted of murder in 1999, but a judge last year threw out the conviction and released him from prison, citing new evidence that did not implicate Masters. Masters now has a lawsuit pending against several police officers, ex-prosecutors and the city.

The city of Fort Collins has asked a federal judge to dismiss the case.

Now 37, Masters sat down for a phone interview with a CNN reporter who covered his case and subsequent release. He said he still holds a grudge against the police and prosecutors who put him behind bars.

Watch Masters the day after his 2008 release »

He's living in Greeley, Colorado, and doesn't get back to Fort Collins much, but he does love traveling. Most notably, he's traveled to Amsterdam, Netherlands, to appear on a talk show with Richard and Selma Eikelenboom, the Dutch forensic scientists who discovered the DNA evidence that ultimately freed Masters.

Things can be tough sometimes, but anything is better than prison, Masters said of his first year as a free man since being imprisoned.

CNN: How have things been in the year since your release?

Masters: It's a struggle to earn enough money to pay my bills and everything, make a living. Other than that, life is good.

Masters: I buy stuff at auction and I sell it on eBay.

In 1987, a bicyclist found the maimed body of Peggy Hettrick, 37, near the home of Tim Masters.

Masters, then 15, quickly became the top suspect in the slaying, but it was not until 1999 that police and prosecutors saw Masters convicted. He was sentenced to life in prison.

In hearings that began in September 2007, Masters' new defense team alleged police and prosecutorial misconduct in the investigation and trial.

CNN: Do you have trouble finding a job because of your time in jail?

Masters: Yeah, I think that has a lot to do with it. The first thing that comes up on a background check is "charges dismissed -- first-degree murder."

Watch Masters thank those last year who worked to free him »

CNN: How else have you been keeping yourself busy?

Masters: Pretty much work. That's it.

Masters: The big challenge is, first of all, you've got to find out where the auctions are. Once you get that down, then you go to the auctions. Another disadvantage I have is I'm a little outdated on the prices of things, so I'm thinking things are worth a lot less than what they're going for. So I have to learn what things are worth now. I go to the auction, and I bid on stuff. I try and buy it cheap enough that I can make a profit on it, load it into the truck, bring it back to the house. I have shelves all in my basement full of just odds and ends. I put it all on the shelves. I do research on the computer and find out which ones I can actually make a profit on, and I list those. You list the item on eBay and let it run its course through the auction for usually seven days. If it sells, you pack it and ship it off. If it doesn't sell, you can either re-list it as an auction item, re-list it as a store item or throw it in the trash.

CNN: What kind of money do you make in a typical week?

CNN: What do you enjoy doing most that you weren't able to do in prison?

Masters: Travel. I've been to see my sister about four times since I've been out. She's in California. I have an uncle in Arizona. This goes along with the eBay business. I go down there every once in a while. He has a warehouse full of used restaurant equipment, and I go down there every so often. I go through his warehouse, take pictures of all the new stuff he's got in and I list it on eBay for him. Sometimes it sells, sometimes it doesn't. In April, a TV station over in Amsterdam paid to fly me over there to be on a talk show with Richard and Selma [Eikelenboom] from the DNA lab. That was cool.

Watch a prosecutor explain why Masters' conviction was reversed »

CNN: What did you have the hardest time getting used to after being in prison so long?

CNN: You spent some prime years of your life -- late 20s, early 30s -- in jail for a crime you didn't commit. What do you think you missed most by not being a free man in those years?

Masters: There's so much. Right off the top, I'd say having a family. I think they're very much responsible for me not having a family right now, a wife and kids. But it goes back further than just them arresting me. It goes all the way back to my high school days when they labeled me a murder suspect among all my peers and my teachers and everything. It goes back a long time.

CNN: They did the same thing when you were in the military, too, right?

Masters: Yeah, that went to hell when I went to Europe. I had a couple beers over in Europe. I didn't get drunk, but we'd have a few beers.

CNN: Are you still cautious with your use of alcohol?

Masters: Yeah, I think I am.

Masters: No. 1, I don't want a hangover [laughing]. I have a lot of repressed anger from all those years, but I don't think it's going to snap on anybody when I have a couple of beers though.

CNN: Any hard feelings toward the Fort Collins Police Department or the prosecutors in the case?

Masters: Oh, absolutely. They locked me up for a decade for something I didn't do. Read how DNA pointed to a new killer

CNN: If you could talk to the prosecutors or police who handled your case, what would you say to them?

Masters: I don't want to talk to them at all.

CNN: Talk about your lawsuit against the prosecutors and police. Who does it target?

Masters: Mainly, [former prosecutors, now Judges] Jolene Blair and Terri Gilmore and [Fort Collins police Lt.] Jim Broderick, but there are a few other defendants involved and the city, but in my mind those are the big three.

Key players in the case »

CNN: Tell me about the suit, what it alleges.

Masters: You'd probably be better to talk to the lawyers about that.

CNN: What would you say to the Hettrick family, which is now left to wonder what happened to their daughter?

CNN: Do you get back to Fort Collins much?

Masters: I try to stay away from Fort Collins. I still have family over there though, so I'm over there every once in a while.

CNN: Does going there bring back bad memories?

Masters: Yeah, and every time I go over there I feel like I'm on the defensive, every time I see a police car with someone pulled over or something -- well, let me give you an example. One day, my aunt and I were coming back from having lunch, and we were about to make a left and the road kept going straight. On the other side of the street, they had the yellow police tape up, and this is only two blocks from my aunt's house. I'm thinking, "Oh great, I wonder when they're going to come interrogate me for something that happened over here." It turns out the yellow tape was up because there was a telephone pole that was leaning over, but it looked like crime scene tape. I didn't know. But I can't live like that, wondering when they are going to harass me for something that I didn't have anything to do with. They did it to me before.

CNN: So you're keeping a low profile?

All About Tim Masters • Fort Collins