College student went for a run, never came back

NEW YORK (CNN) -- Tiffany Sessions was a 20-year-old junior studying economics at the University of Florida in Gainesville when she decided to go out for a run. She never came back. 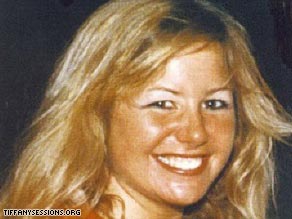 College student Tiffany Sessions has been missing since February 9, 1989.

Sessions left her off-campus apartment about 6 p.m. February 9, 1989. She told her roommate she'd be back shortly and took her Walkman with her.

It was the last time anyone would see her.

That was 20 years ago, a time when no one had cell phones, Blackberries or Web sites to aid in tracking a missing or abducted person.

The only clues came from people who recalled seeing a young woman fitting Sessions' description walking down the main street just before dusk.

Sessions' jogging route usually took her down Gainesville's main street to a small dirt trail that cut through the woods. The loop was 1½ miles each way and took her about an hour.

Police and family believe that she was abducted near the woods. After extensive searches, no clues were found: not her remains, not her Walkman, not the clothes she was wearing.

"Much of the area in the last decade has been paved over, with new construction, making a search today very difficult," said Detective Bob Dean of the Alachua County Sheriff's Office. However, investigators are still searching and working this case actively.

Searchers were out as recently as late December, seeking clues with newer technologies.

"We have used ground sonar equipment, even," Dean said.

Over the years, there have been some possible suspects -- people who came forward and confessed -- but police have ruled them out as credible suspects.

One potential suspect was a man who was in jail for killing a 5-year-old girl. He'd written a letter to police, claiming he was responsible for Tiffany Sessions' disappearance.

But when questioned later by police, he denied writing the letter, even though handwriting analysis indicated that he had.

"Although police don't think so, I still believe this guy could have something to do with my daughter's disappearance," said Patrick Sessions, Tiffany's father.

According to Patrick Sessions, who has been closely involved with the police investigating his daughter's case, the man who confessed was a sex offender who had been released just a month and a half before Tiffany Sessions disappeared.

The cold case unit of the Alachua County Sheriff's Office has taken over this case. Patrick Sessions observed the 20th anniversary of his daughter's disappearance by making renewed appeals through the media.

Police and family urge anyone with more information about Tiffany Sessions or information leading to the arrest of the person or persons responsible for her disappearance to call the tip line at 352-367-4161.

Tiffany Sessions was last seen wearing red sweatpants, a white sweatshirt with the word "Aspen" on it, a gold Rolex watch and a black Sony Walkman. She was 5'3" and weighed 125 pounds at the time of her disappearance. She has blonde hair and brown eyes.