Teen vanishes on way to school

(CNN) -- Last Friday the 13th was supposed to be a special day for 14-year-old Amber Leeanne DuBois. 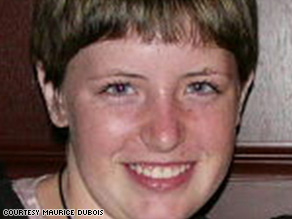 She left her home in Escondido, California, around 7 a.m. for school with a check in hand, a down payment on a baby lamb that she was going to raise and care for as part of her Future Farmers of America class.

It was a day that she'd been looking forward to for more than a year, her family says. But she never made it to school and hasn't been heard from since, prompting authorities to launch a massive search for the missing teen.

"She would not have given up that lamb for anything," her mother, Carrie McGonigle, said. "She's a wholesome kid. She doesn't run amok like most teenagers. She did not run away, I guarantee it."

Her cell phone was turned on once for about 20 seconds the day after she disappeared and has not been turned on since then, Escondido Police spokesman Lt. Bob Benton said.

Her mother and her live-in boyfriend voluntarily submitted to polygraph tests and passed, Benton said. Amber's father, who lives in Orange County, California, and other relatives have been interviewed, he added.

A classmate reported seeing Amber a week ago on Sunday, walking with an unidentified person about half a mile from her home, Benton said.

"We don't know the circumstances of her disappearance or the person she was walking with, but being 14 years old and missing as long as she has without ever having gone missing before is very suspicious," Benton said.

The FBI is assisting the Escondido Police in the investigation, said Special Agent Darrell Foxworth from the agency's San Diego office.

"The assistance that we are providing includes conducting interviews and following up on leads as they develop," Foxworth said.

Amber's parents insist she would never stay away from home for so long without notifying them, leading them to believe she was abducted.

"As a person who knows my daughter very, very well, I'm 95 percent positive she's not just wandering around the area," said her father, Maurice DuBois. "If she was abducted by stranger -- hopefully not -- she could be anywhere in the U.S, Mexico by now. Eight days is a long time to be missing."

Amber's parents say she was a not-so-typical teen who shunned social networking sites like MySpace.com and Facebook and preferred reading, drawing and spending time with friends at home over hanging out at the mall.

"When she'd get in trouble, I'd have to take her books away," McGonigle said, chuckling as she recalled her daughter's habit of hiding under her bed sheets with a flashlight so she could read late at night.

Her first passion was animals, a lifelong devotion that began with her first horse, Rojo, and led to her joining the FFA when she entered high school.

Two weeks before she disappeared, she wrote her mother a letter urging her to let her buy the lamb she planned to name Nannette, outlining how she would care for it and suggesting it would look good on her resume, McGonigle said.

"I know in my heart that there's nothing that would take her away from that lamb. She would never miss that day. That's how I know she didn't just run away," McGonigle said.

"I go to sleep thinking she's going to be walking in my room any minute saying, 'Mom, I'm back.' But now it's just becoming a numb feeling."

Members of the community of Escondido, a bedroom community of San Diego, have been generous with donations of money, resources and manpower in the efforts to locate Amber, her mother said.

A candlelight vigil at Escondido High School on Friday night drew about 200 people, Amber's friend Hailey Kosinski said, in a show of support that brought a measure of comfort to her family and friends.

Hailey, who has known Amber since the sixth grade, said she could always count on her to brighten her day when she was feeling down.

"She smiles and tells you everything's going to be OK and you just feel better," she said. "She's sort of shy when you first meet her, but once you get to know her, she's the kindest person you'll ever meet."

The 14-year-old described her friend's disappearance as a rude awakening to the dangers of ordinary life.

"It makes you think of the many, many situations that could occur when you're walking on the street, or when you walk away from friends for just a little while," said Hailey, who has spent most of her free time in the past week posting fliers on traffic poles and in stores.

"It's the most horrible, gut-wrenching feeling to know your friend is out there and there's nothing you can do to help her. You feel so powerless."

All About Missing Persons • Escondido • Federal Bureau of Investigation