NEW YORK (CNN) -- She said she had nothing left to lose when she handed the bank teller the hastily scrawled note. 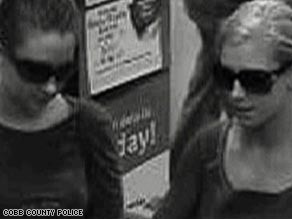 The "Barbie Bandits" are among the more famous of recent female bank robbers. Both were convicted.

"We're armed," the note said. "Don't say anything. Just give us all the money."

Moments later, the woman and her male accomplice raced from the bank, jumped in their car and sped off with $10,000 in cash.

"It felt powerful, exciting, quick," said the woman, who spoke with CNN under the pseudonym Jane Smith. "At that time of my life, everything was upside down and I didn't have any control."

Smith told CNN she was going through a bad divorce and that robbing a bank "made me feel like I was in control again." She is one of a growing number of female bank robbers, a crime normally committed by men.

Nationwide, 6.2 percent of all bank heists today are committed by women. That's up from 4.9 percent in 2002 -- a 25 percent increase, according to the most recent FBI crime statistics.

"Here's a crime that you can commit easily and its an equal opportunity crime," crime historian Robert McCrie said. Banks have become so customer-friendly and open, they've become "a safe place to rob," he added.

Wake up to American Morning
Weekdays, 6 AM ET

In Long Island's Nassau County, Detective Sgt. John Giambrone says he came across not one female bank robber in his first 25 years in law enforcement. He has seen 15 in the past three years.

"For a woman, especially a woman, to take that step ... you're crossing a big threshold," said Giambrone, who heads up the Nassau County police department's robbery squad.

In Giambrone's experience, the women who are captured in bank heists usually say they're doing it to "pay bills, get a little extra cash."

It's different for the men, he added. They usually say they rob banks for the thrill of it, or to get money for drug, alcohol or gambling addictions.

Giambrone said women tend to carefully plan their holdups, and prepare the notes ahead of time.

"Women are more pragmatic," forensic sociologist Rosemary Erikson agreed. "They need diapers for the baby that kind of thing."

The most notorious female bank robber was Bonnie Parker of the famed Bonnie and Clyde duo. Often she was armed, not the usual modus operandi of today's women. Like the men, they usually just hand the teller a note, knowing most banks instruct employees to hand over the cash rather than risk injuries.

As crimes go, bank robbery is hardly a fool-proof caper. The chances of getting caught are high, the prison sentences long, Erikson pointed out.

Three out of four bank robbers are caught, she said. The arrest rate is high because the FBI is involved in almost all bank robbery investigations. The penalty can be as high as 26 years.

But 83 percent of bank robbers think they are not going to be caught, Erikson said. "They have this kind of immortality thing, they have inflated egos."

Jane Smith, who is trying to rebuild her life after serving five years in a maximum security prison, agrees that while the holdup was exciting, it wasn't worth it.

Still, she couldn't help smiling as she recalled how the tire blew on the getaway car while she and her accomplice made their getaway.

"I kept going on the rims, sparks flying on the highway," she said.

When she could drive no farther, Smith recalled, "I started flagging people down. All the money is on the floorboard of the car. One lady did pull over to pick us up and so I got the money and I stuffed it in my purse and could barely zip it. She took us to a convenience store close by and I called a taxi."

She went on wild spending spree, going through most of the money before her arrest several days later.

She said she would never again rob a bank, because her arrest and incarceration nearly destroyed her parents and two kids.

But Smith admitted that the thrill was addictive. "I loved the danger in it. I wanted to get more money. I wanted to keep doing it. That's how it really felt -- an adrenaline rush. Perfect."

All About Robbery • Federal Bureau of Investigation