(CNN) -- Two former U.S. Border Patrol agents -- whose cases became flashpoints in the controversy over border security -- were released early from prison Tuesday, one of their attorneys and a congressman said. 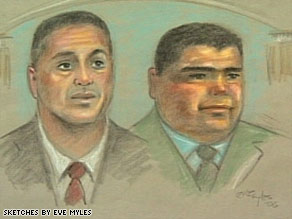 The agents were convicted in 2006 of shooting and wounding an unarmed illegal immigrant and then covering it up.

After the commutation, their prison sentences were set to end March 20.

Ramos was released on furlough to travel from prison in Phoenix, Arizona, to his home in El Paso, Texas, where he will serve the remaining portion of his sentence under house arrest, said his attorney, David L. Botsford of Austin, Texas.

After March 20, Ramos will be on "supervised release" -- similar to probation -- for up to three years, Botsford said.

"At last, Ramos and Compean have been rightfully reunited with their families," Rohrabacher said in a statement. "This day is long overdue. I wish the Ramos and Compean families the best as they now try to pick up the pieces and begin to heal from this terrible ordeal."

Both men had requested presidential clemency, and the U.S. Justice Department's Office of the Pardon Attorney was reviewing their requests when Bush made his decision, office spokeswoman Laura Sweeney said.

The official noted that both Democratic and Republican members of Congress had supported a commutation, including President Barack Obama's chief of staff, Rahm Emanuel, and Texas GOP Sens. Kay Bailey Hutchison and John Cornyn.

Department of Homeland Security Inspector General Richard L. Skinner, in a statement posted on the agency's Web site, confirmed that his staff wrongly told members of Congress last September that Compean had stated he "wanted to shoot a Mexican."

"At the time my staff made that statement, they believed it to be true, although we later learned it was inaccurate," Skinner said. "In fact, Mr. Compean had stated in a sworn statement that 'my intent was to kill the alien ... and I think Nacho [Ramos] was also trying to kill the alien.' "

Critics of U.S. immigration policy have been campaigning for a pardon for the two agents, arguing they were just doing their jobs.

The shooting happened February 17, 2005, on the U.S.-Mexico border southeast of El Paso, Texas.

During their trial, Ramos and Compean said that the illegal immigrant, Osvaldo Aldrete-Davila, had brandished a gun while actively resisting arrest.

Aldrete-Davila said, however, that he was unarmed and trying to surrender when Compean attempted to beat him with a shotgun.

Aldrete-Davila was shot while fleeing toward the Rio Grande. Ramos and Compean were convicted of assault with a dangerous weapon, lying about the incident and violating Aldrete-Davila's Fourth Amendment right against illegal search and seizure.

The case became a political flashpoint, with advocates of tighter border controls defending the agents and civil liberties groups saying that the agents had used illegal and excessive force against Aldrete-Davila.

A commutation reduces a convict's prison term, but the conviction remains on the person's record. A pardon wipes the slate clean by erasing the record of the conviction.