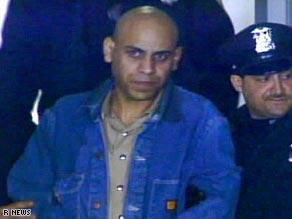 Former hospital worker Frank Garcia, 34, has been accused in the shooting rampage.

"The individuals who were shot were known to the suspect. It was not necessarily a random act," Monroe County Sheriff Patrick O'Flynn said.

The first two victims -- Mary Sillman, 23, and Randall Norman, 41 -- were fatally shot before 5 a.m. at Lakeside Memorial Hospital in Brockport, where Garcia was once employed, O'Flynn said. Another woman was wounded and is undergoing treatment at a nearby hospital, he said.

The second shooting happened at a house in nearby Ontario County on Saturday afternoon.

Christopher Glatz, 45, and his wife, Kim, 38, were killed "execution-style" while their two teenagers were in the suburban Rochester home, Ontario County Sheriff Philip Povero said.

The teens were not wounded, but it is unclear whether they witnessed the event.

Ballistic evidence has connected the two crime scenes, Povero said. Investigators found the matching brass cartridges from a pistol found on Garcia when he was arrested, he said.

Garcia was to be arraigned Saturday night in Monroe County, where the first shootings occurred, on two counts of first-degree murder and one count of attempted murder in the second degree, O'Flynn said.

"During Mary's brief time within the system, those who worked closest with Mary described her as warm, kind and compassionate toward the residents of Lakeside Beikirch Care Center," Lakeside interim CEO Michael Stapleton said in a statement.

"This certainly speaks to a tragedy that is enormous, not only the taking of the lives that were taken, but the people that were left behind, the person in Brockport and the two teenage children who were present when their mother was systematically murdered," Povero said.