DEKALB, Illinois (CNN) -- A former student who killed five people at Northern Illinois University last Valentine's Day had been drummed out of the Army for hiding his psychiatric history and expressed admiration for famous murderers, CNN has learned. 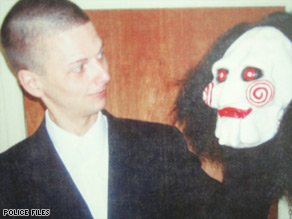 Steven Kazmierczak was known as "strange Steve" to roommates, studied the Virginia Tech and Columbine massacres and idolized the sadistic killer in the "Saw" horror films, according to documents from the year-long investigation into the NIU killings.

The still-unreleased police file on the shootings, which also left 18 students wounded, shows that 27-year-old Kazmierczak had been hospitalized several times as a teenager for psychiatric issues and had a history of suicide attempts. Kazmierczak shot and killed himself at the end of his shooting rampage.

Police told CNN that they received no information that would have tipped them off to his rampage.

But David Vann, who has written a book about what led to the shootings, said his research shows that Kazmierczak carefully planned the shootings and that there was a lifetime of red flags that indicated he was capable of such an act.

"The degree of self-destruction and antisocial behavior at the end, of really scary behaviors, was just phenomenal," Vann said. "And at some point after you look at all of those records, you just have to wonder, what does a mass murderer have to do to get noticed?"

The NIU Police Department has repeatedly refused CNN's requests to release any files related to the investigation, since it is still under way. But CNN was given exclusive access to some of the approximately 1,500 pages of police reports, psychiatric records and family documents by Vann, who said he obtained the files from a law enforcement source.

See one of Kazmierczak's psychiatric reports »

"It's just amazing that he could coldly plan to kill all of those people. ... Everything was planned out carefully," Vann said.

Kazmierczak, a former NIU student, was going to graduate school at the University of Illinois in Champaign at the time of the killings. During his time at NIU, he wrote a paper called "No Crazies With Guns," in which he used the April 2007 massacre at Virginia Tech to analyze whether mentally ill people should have access to guns.

Kazmierczak was later able to purchase weapons used in the NIU killings because he had not been in a mental facility in the past five years, which would have disqualified him in Illinois from buying a gun.

After the shooting, NIU Police Chief Donald Grady said there were no "red flags" in Kazmierczak's past that would have foreshadowed what happened. He told CNN this week that he stands by that statement.

"Was he obsessed? Was he not obsessed? That information didn't come through to the university police at any time he was here. ... How could it be a red flag if it never came to us?"

He added, "It's the same story. Nothing has changed in that regard. We haven't found anything that would dispel any of that. So it is absolutely the same right now."

Grady said the investigation was ongoing but not a priority because there was no one involved but Kazmierczak. SIU blog: Could you spot a killer?

"We already know he is no longer with us," he said. "We already know what he was wearing and what he used and how he went about doing it. I'm not certain that there's much else there."

Asked about information in the police files indicating that Kazmierczak exhibited odd behavior at NIU, Grady said that was never reported to the police department -- and insisted that there were no outward warning signs.

"There are lots of people on this campus that someone would refer to as strange," he said. "I mean, we have women that walk around with dog collars. I consider that to be strange. I don't know what someone else would consider that to be, but walking around with a dog collar strapped to your neck seems to me to be strange. Is that a sign that we should now be concerned that this person is about to engage in acts of violence? Well, I don't think so."

As far back as childhood, Kazmierczak's mother wrote in a family book that her son was overly sensitive and bullied.

"Sometimes I wish he would be a little tougher, and bop the daylights out of people that pick on him. ... One day he will," she wrote.

In junior high school, Kazmierczak made a bomb out of Drano, according to the documents. He also had a history of attempted suicides and was hospitalized nine times for psychiatric issues before 2001.

He spent three years at Thresholds, a psychiatric center in Chicago, according to psychiatric records in the files. He was kicked out of the program for "non-compliance and deception," the records state, adding that Kazmierczak "has had multiple hospitalizations and ... impulsive behavior and suicidal gestures."

He enlisted in the Army in September 2001 but was discharged the following February for lying on his application about his mental illness, Army records state. After that, he enrolled at NIU, where his freshman suitemates recall him as being obsessed with infamous figures such as Adolf Hitler and Ted Bundy.

"He was called 'strange Steve' by everyone in the dorm, and everyone knew that something was wrong with him," Vann said. But he also was a successful graduate student at NIU who tutored other students.

After Kazmierczak transferred to the University of Illinois graduate program in social work, he began seeing a therapist. Over the next several months, he was on and off an antidepressant and sleeping medication.

In October 2007, according to the records, he and his former live-in girlfriend, Jessica Baty, saw the horror film "Saw IV." Kazmierczak then dressed up as Jigsaw, the movie's sadistic killer narrator, for Halloween and had a tattoo of the character -- depicted riding a bicycle through a puddle of blood -- on his forearm.

"I think of all the texts he left, movies and books, the 'Saw' movies are very important," said Vann, who wrote an article about Kazmierczak for Esquire magazine in 2008.

In the films, Jigsaw puts his victims through torturous tests to see whether they value life enough to live.

"He's trying to teach his victims the value of their lives through torturing them and making them face possible death, and he has these creepy sayings like 'See what I see, feel what I feel,' and it's almost like it's supposed to be therapy through empathy," Vann said.

By February 2008, records show, Kazmierczak began buying ammunition and guns. In an e-mail to a friend, he joked about a recent shooting at a Chicago Lane Bryant store in which the victims were shot execution-style.

Jessica Baty told CNN in an exclusive interview three days after the shootings that Kazmierczak had stopped taking an antidepression medication for obsessive-compulsive disorder and anxiety three weeks before the shooting.

Watch Baty in the up-close interview »

Baty, who said she spoke with Kazmierczak on the eve of the shooting, later received gifts in the mail, including an engagement ring.

She declined CNN's requests for another interview.

In the police reports, Baty says she knew that Kazmierczak had sex with women he met on the online classified site Craigslist in the months before the shooting. She also said he once told her, "If anything happens to me, don't tell anyone about me."

She told police that she "did not know what to believe about Steven anymore."

And Grady said he doesn't want to give Kazmierczak any more attention.

"This one individual came in and certainly caused trauma to this institution," he said. "Am I angry about that? Absolutely, I am.

"Do I ever want to see that happen again? No. Not ever, not here, not anywhere else, and I really don't want to glamorize what it is that an individual such as that has done and give him more credit and credibility than he deserves."