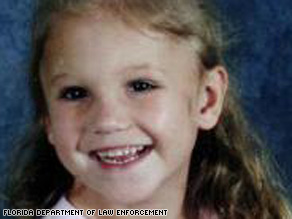 Haleigh Cummings has been missing since 3 a.m. Tuesday, when her father's girlfriend called 911 to say the child had vanished from her Putnam County home.

The police must "assume abduction," he said.

"All the answers to why you'd want to take a 5-year-old are ugly," Bowling said.

Police have no official suspects, but are treating everyone they interview as one.

"All the world's a suspect" now, Bowling said.

A nationwide Amber Alert says the girl was last seen wearing a pink shirt and underwear. Police plan to use infrared aviation technology after dark Wednesday in their search.

"She's a 5-year-old child, and she's afraid of the dark," Bowling said.

Watch the father describe what happened »

Croslin put Haleigh to bed at 8 p.m. and then went to bed herself at 10 p.m., they said. Croslin told police she woke up at 3 a.m. and discovered Haleigh missing. Croslin then called 911 and told a dispatcher she found a brick on the floor of the family's double-wide trailer, according to CNN affiliate WJXT-TV.

The station's Web site printed the text of the 911 call, which included this exchange:

Dispatch: OK. All right, you said your back door was wide open?

Cummings said, "We never use the back door and I check it every day."

Cummings said he has only used the back door two times since he lived in the trailer.

Cummings said his daughter's favorite thing in life was her daddy.

The father remains in a tent with his family while police search the area around his house.

Ronald's father, Jack Cummings, said, "You see it on TV, but you never think it would happen to you."

Police continue to search the wooded area around the family trailer where Haleigh was last seen.

"I wish I could go out in the woods and search, but the police won't let the family go search," said Jack Cummings whose eyes were red and filled with tears.

Croslin is staying with relatives as the investigation continues, said Bowling, describing the girlfriend as a "child herself."

Haleigh's mother, Crystal Sheffield, wept as she stood in front of reporters.

"I just want whoever's got her to bring her home," the girl's mother said. "That's all I want, is my baby home."

Griffis said that her daughter and Ronald Cummings had a "rocky relationship" and that the two took turns spending weekends with their daughter. Sheffield lives near the Florida-Georgia line and has been interviewed by law enforcement, according to police. She and Cummings are divorced.

Investigators are looking into various angles of the case, including finding out the location of 44 registered sexual offenders who live within a five-mile radius of the Cummings home, Greenwood said.

Though that number may sound high, it includes both Putnam and Palatka counties, which are separated by the St. Johns River, the law enforcement spokesman said.

Police are offering but not requiring all those interviewed in the case to take polygraph tests.

Anyone with information is encouraged to call the Putnam County Sheriff's Office at 386-329-0800 or the Florida Department of Law Enforcement's Missing Endangered Persons Information Clearinghouse at 888-FL-MISSING.

All About Orlando (Florida) • Missing Children