A celebrity breakup, then a fishy disappearance 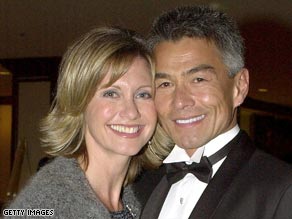 Olivia Newton-John and Patrick McDermott were together for nine years. Then he disappeared.

He wasn't on board the fishing boat "Freedom" when it returned to shore in San Pedro, California, after an overnight excursion.

Investigators say he'd visited Newton-John the day before with flowers, bid her farewell and ended their relationship.

McDermott was seen boarding the vessel that evening with his fishing gear and a duffle bag. The 22 passengers and three crew members on board gave conflicting reports about his whereabouts both during and at the end of the trip.

Police have determined that McDermott did indeed board the vessel, fished with the others and socialized on the boat both on June 30 and the next day, July 1.

However, the witness accounts conflict about what happened as the boat neared shore on the afternoon of July 1. No one is quite sure when they last saw McDermott in the last 30 minutes of the voyage.

Watch why this cold case is a real mystery »

McDermott paid his bar and kitchen tab, which consisted of two hot dogs and a Coke, a kitchen receipt shows. Then he seems to have vanished.

Some witnesses told police they thought they saw McDermott get off the boat when it docked and walk toward the parking lot, but they cannot be sure it was him.

Ten days passed before relatives began a search for McDermott. They first became alarmed on July 6 when he didn't show up for a family gathering.

Relatives found his car still parked at the San Pedro Marina where he'd left it when he boarded the fishing vessel.

Investigators then discovered McDermott had left personal items on the boat, including his wallet. As police looked into his background, they learned that McDermott had been facing a mountain of debt, including being ordered by a court to pay back child support payments for his 15-year-old son from a prior marriage.

A Coast Guard investigation concluded that he was "most likely drowned at sea." But some people believe he may be alive.

Investigators have theorized that McDermott may have staged his death to escape financial pressures.

Since McDermott disappeared, there have been hundreds of supposed sightings of him in Mexico.

Private investigators and some police investigators speculate that McDermott may be hiding in the small village of Sayulita, 40 miles outside the resort town of Puerta Vallarta.

A community of expatriates in Sayulita work as deckhands for the mega-yachts owned by billionaire South American businessmen.

The Coast Guard, the lead investigative agency, says its case is closed. It found no evidence to support or disprove criminality or foul play in the McDermott disappearance.

"We spoke to dozens of witnesses on that vessel and we concluded any reported sightings of McDermott getting off that boat after it docked were not credible," said Scott Epperson, a Coast Guard spokesman in Long Beach.

Although the investigation is officially closed, he encourages anyone with credible tips to please call the tip line at 310-521-4296.

McDermott was 48 years old at the time of his disappearance three years ago. He is 5 feet 9 inches tall and weighs 140 pounds, with brown eyes and salt-and-pepper hair.