Utah cities on alert as anniversary of 2 slayings hits

(CNN) -- Officers in two Utah cities will make extra patrols Monday, the anniversary of the slayings of two women -- one in 2006, the other in 2008 -- who investigators believe were killed by the same person. 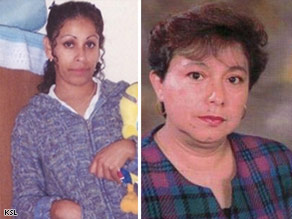 No arrest has been made. Both women were Hispanic, and both were found slain in their apartments -- one in Taylorsville and the other a mile away in West Valley City.

Authorities are trying to determine whether the date is significant, but they want residents "to be cautious in general" and not focus just on Monday, West Valley City police Sgt. Mike Powell said. Still, police will do extra patrols Monday "just so the public is aware we're out and about," he said.

Investigators are not saying a serial killer was involved, Powell said. But the links are alarming for the involved neighborhoods, which are heavily populated by Latinos, the director of a Hispanic advocacy group said.

"[News of the links] is important because, although I think law enforcement doesn't want to say it, this could be a serial killer type of thing, and there's concern from our point of view that there could be a guy that could be trying to kill people on a certain date," said Tony Yapias, director of Proyecto Latino de Utah.

Mejia, 29, was six months' pregnant when she was sexually assaulted and strangled, CNN affiliate KSL-TV in Salt Lake City reported. She was found dead in her Taylorsville apartment, and her unborn child died, too, police said.

Her car was found abandoned outside a hotel in nearby Murray, Utah, according to KSL. Some jewelry of Mejia's is missing, Powell said.

Castillo, 57, was found strangled in her apartment two years later in West Valley City, about a mile away from Mejia's apartment, according to CNN affiliate KTVX-TV in Salt Lake City. Her son found the body, and there were no signs of forced entry, KSL reported.

Police in both cities announced on Wednesday that forensic evidence linked the slayings to one killer, and that they had reason to believe he was a Hispanic male in his late teens or early 20s, standing between 5 feet 3 inches to 5 feet 5 inches tall, weighing 135 to 150 pounds and having short black hair.

Powell declined to say how investigators arrived at those details or what kind of forensic evidence linked the killings. Police haven't said whether the women knew their attacker.

Investigators haven't linked the killings to any other but are "not closing the door on anything that might be related," said Powell, who added he isn't aware of any other February 9 homicides in the two cities or surrounding communities in recent years.

The link between the February 9 stranglings has rattled some residents in the area, KTVX reported.

"I'm scared for me and my daughter to be here," West Valley City resident Elizabeth Berrelleza told KTVX.

The police departments said Thursday they've created a joint eight-member task force to investigate the killings. The departments had known about each other's cases and had compared information for quite some time, "but it's just recently that we've been able to link the cases," Powell said.

"[The significance of the date] is something that we're looking further into, and if someone has some information that would enlighten us, that would be helpful," Powell said.

At a news conference Thursday, the task force made a special appeal to Latinos in the area, saying anyone with information -- including any undocumented person -- should come forward without fear.

"Sometimes they're worried about their [immigration] status. We're not interested in that. Come forward regardless," Powell said in an interview after the news conference.

Police reached out to Yapias and other leaders of Hispanic advocacy groups, Yapias said. Yapias' group is working with Spanish-language media in the area to spread information about the killings and investigators' request for information, he said.

"Law enforcement has assured everyone that if someone is undocumented and they have information, they just want the information," Yapias said. "But if they're afraid because of their legal status, then I or any other community leader can act as a mediator to make sure they're going to be protected."

Anyone with information about the slayings can call the task force's tip line at 801-965-5121 or send an e-mail to the task force at taskforce@wvc-ut.gov, police said.

All About Utah • Murder and Homicide • Hispanic and Latino Issues