Scabby the Rat comes out winner in free speech battle

(CNN) -- Scabby the Rat may not have a word to say, but the large rodent-shaped balloon helped a labor union earn a free-speech victory Thursday before New Jersey's highest court. 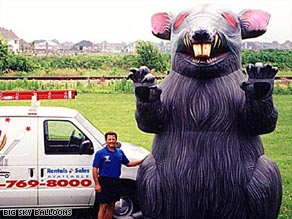 Big Sky Balloons, based in Chicago, Illinois, rents out "union rats" like Scabby and other inflatables.

The seven justices ruled unanimously that the local union had a right to display its 10-foot-tall, black, rat-shaped balloon at a rally held outside a fitness center.

At issue was whether a township could enforce a ban on inflatable or portable signs and banners on public property. Lawrence Township police had levied a $100 fine against an official from the International Brotherhood of Electrical Workers because of Scabby.

The court concluded that while townships have a right to maintain an "aesthetic environment" and ensure public safety, its restrictions on expressive displays "do not justify a content-based restriction of non-commercial speech."

"There is no evidence to suggest that a rat balloon is significantly more harmful to aesthetics or safety than a similar item being displayed as an advertisement or commercial logo," wrote Justice John Wallace Jr.

The balloon and others like it, nicknamed Scabby by the Chicago-based company that made them, have been used by labor unions as street theater since 1990 to protest anti-union activities.

IBEW members were marching on the sidewalk outside Gold's Gym in Lawrence Township in April 2005 in response to a dispute with a contractor working at the business.

A police officer had ordered the balloon deflated, but returned an hour later to find it blown back up. The labor official in charge admitted he ordered the rat reinflated, and he was given a summons.

Lower state courts had ruled the township's ordinance was content-neutral and did not suppress the union's ability to spread its message, since members still could chant and distribute handbills to the public.

All About First Amendment Rights