List of Madoff's presumed victims runs into the thousands

NEW YORK (CNN) -- A 162-page list naming thousands of presumed victims of alleged fraud mastermind Bernard Madoff has been released by the trustee that is liquidating Madoff's investment company. 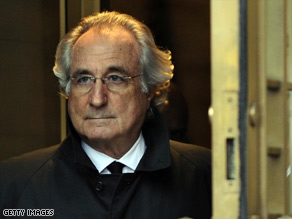 Bernard Madoff is under 24-hour house arrest in his Upper East Side luxury apartment.

Notables on the list include Columbia University, the International Brotherhood of Teamsters Local 1249 Pension Fund, The Elie Wiesel Foundation, John Denver Enterprises and Fred Wilpon, the owner of the New York Mets.

Individuals on the list include John Malkovich and Sandy Koufax. However, it has not been confirmed that those on the list are actually the actor and the baseball Hall of Famer, respectively.

Seventy-year-old Madoff is under 24-hour house arrest in his Upper East Side luxury apartment, with $10 million bail placed against his home, as well as his wife's residences in Montauk, New York, and Palm Beach, Florida.

He faces one charge of securities fraud in connection with an international scheme that has cost some investors their life savings. Madoff estimated that investors lost $50 billion, according to the criminal complaint against him.

If convicted, he could face up to 20 years in prison and a $5 million fine.

-- CNN's Emily Anderson and Cheryl Robinson contributed to this report.

All About Bernard Madoff • John Malkovich