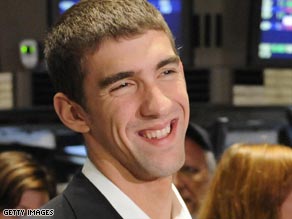 Michael Phelps is facing a criminal investigation into whether he smoked marijuana on a college campus.

Authorities will file criminal charges if the investigation determines that they are warranted, a spokesman said Tuesday.

"If someone breaks the law in Richland County, we have an obligation as law enforcement to investigate and to bring charges," Sheriff Leon Lott said in a statement.

"The Richland County Sheriff's Department is making an effort to determine if Mr. Phelps broke the law. If he did, he will be charged in the same manner as anyone else. The sheriff has a responsibility to be fair, to enforce the law and to not turn a blind eye because someone is a celebrity."

Phelps admitted "regrettable behavior" on Sunday after a British newspaper published a photograph of him smoking through a bong. The tabloid News of the World showed Phelps using the bong during what it said was a November party at the University of South Carolina, in Richland County.

Both university police and Columbia, South Carolina, police have said they would not pursue charges, according to The State newspaper in Columbia. It was unclear where the party took place, the paper said, or whether it was on the USC campus.

"I engaged in behavior which was regrettable and demonstrated bad judgment," said Phelps, who won a record eight gold medals at the 2008 Olympic Games in Beijing, China, in a statement Sunday.

See the photo on the cover of Star magazine »

"I'm 23 years old, and despite the successes I have had in the pool, I acted in a youthful and inappropriate way, not in a manner that people have come to expect from me," he said. "For this, I am sorry. I promise my fans and the public -- it will not happen again."

The U.S. Olympic Committee also issued a statement that said in part, "Michael has acknowledged that he made a mistake and apologized for his actions. We are confident that, going forward, Michael will consistently set the kind of example we all expect from a great Olympic champion."

Phelps is one of 12 Olympic athletes who have signed on to "My Victory," an initiative launched last year by the U.S. Anti-Doping Agency aimed at keeping competitive sports clean.