White Chrysler may be clue to lifeguard's slaying

NEW YORK (CNN) -- Molly Bish's father has often said that it probably took only eight minutes for his 16-year-old daughter to be abducted. 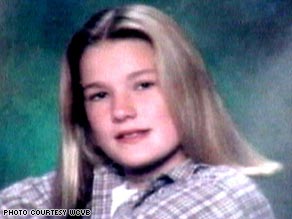 Molly Bish was 16 and working as a lifeguard when she disappeared. Her remains were found three years later.

It took three years before a hunter found her body, five miles away. Her tattered bathing suit was found with her scattered bones.

It has taken nearly nine years for investigators to come close to a break in the case.

Molly Bish worked as a lifeguard at Comins Pond in Warren, Massachusetts. Her mother, Magi Bish, saw a man in a white car as she dropped Molly off on the morning of June 27, 2000.

She waved goodbye as she drove off. It was the last time Magi Bish would see her daughter alive.

Shortly after 10 a.m., another mother arrived at the beach with her children in tow. She found Molly's backpack, lifeguard chair and beach towel. Her first-aid kit was wide open on a bench. But Molly was nowhere to be seen.

Molly's worried boss called police a few hours later. They mounted the largest missing persons search in Massachusetts history. There was no sign of her.

"Molly would never have abandoned her job or her post of her own accord," said her sister, Heather Bish.

John and Magi Bish slowly began to realize that Molly must have been abducted. Magi Bish couldn't get the man in the white car out of her mind. He gave her an uneasy feeling when she dropped off Molly. She even waited until he drove away before she left herself.

The worried mother gave police a detailed description. Investigators released composite sketches of a dark-haired man with salt-and-pepper hair in his late 40s.

A man in custody for another case closely resembles the composite sketch, family members say.

"Over the years, there have been many persons of interest and leads, but nothing as promising as this one," Heather Bish said.

Authorities have questioned this man. Massachusetts State Police and the Worcester County District Attorney's office aren't ready to name him a suspect. But he is in jail, the prime suspect in his girlfriend's slaying.

"We questioned (him) about the Bish case based on a tip. We get hundreds of tips and we investigate and follow up on all of them," said Timothy Connelly, spokesperson for the Worcester County District Attorney. Connelly would not comment on what the man told investigators.

He grew up in the Warren area, his former wife said. She added that he lived neaby in Southbridge until shortly after Molly disappeared. Then he sold his house and moved to Florida with the girlfriend he's now accused of stabbing and decapitating.

The man often hunted and fished near Comins Pond, his family and friends said. His brother owned a white Chrysler similar to the car that Molly's mother saw on the day she disappeared, said the man's ex-wife.

"This is one of the first real leads we've had in a long time that makes sense and I am very hopeful it's the break we've been looking for," said Tom Shamshak, a private investigator hired by the Bish family.

Shamshak added that investigators have been trying to find the man's brother, who owned the white car.

Police urge anyone having any information leading to the arrest of the person or persons responsible for Molly Bish's death to please call their tip line at 508-832-9124.