Woman calls her engagement to Drew Peterson a media stunt

(CNN/In Session) -- A young mother of two who had been living with a former police officer suspected in his wife's disappearance said Monday that she moved out when she came to her senses. 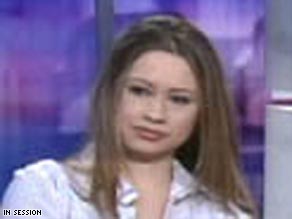 Christina Raines has moved out of Drew Peterson's house and denies they were ever engaged.

"We were never engaged," said Christina Raines, 24, during an appearance Monday on "The Early Show" on CBS.

Raines told CBS that she decided not to go along with Drew Peterson's "staged" engagement, which she said was a publicity "stunt" so the former police sergeant from Bolingbrook, Illinois, "could be in the media."

During the CBS appearance, and later during one with In Session's Lisa Bloom, Raines said that she did not feel comfortable answering questions about Stacy Peterson, whose October 28, 2007, disappearance has received national attention. Photos of Stacy Peterson are still on display inside the Peterson house, she said.

Drew Peterson is considered a suspect in the disappearance of his 23-year-old wife. Police are treating the case as a homicide.

He has denied wrongdoing and insists that his wife left him for another man.

Later Monday, Raines joined her father, Edward, with In Session's Lisa Bloom. In Session, formerly known as CourtTV, is a CNN partner.

Watch what Raines had to say »

Raines told In Session she first met Drew and Stacy Peterson at a laundromat when she was a teenager. She said she later met Peterson again in a bar.

"He was a charmer. And he really romanced me," she said. She added that he was "a good father" and was kind to her and her children. "He took me out to dinner, was there for me, like hand and foot," she told In Session.

Raines said she was aware of the suspicions and news reports about Stacy Peterson's disappearance. "But at the time I didn't believe any of it," she said. "I was just so confused and I believed him. I believed everything that he told me," Raines told In Session.

"At first I believed that she could have left. I believed him. I believed everything he said," she added. But, she said, doubts began to gnaw at her.

"Seeing her pictures in the house, seeing how she was with her kids, and all her pictures, I kind of think, 'Wait, just wait a minute.' How could she leave them?"

Police also have reopened an inquiry into the 2004 death of another Peterson wife, Kathleen Savio, whose body was found in a bathtub. Her death was originally classified as an accident, but her remains were exhumed after Stacy Peterson's disappearance. Savio's death is now considered to be a homicide.

Bloom said she first met Christina Raines' father, trucker Edward Raines, last week, when they both were guests on the "Dr. Phil" show. She and the host, Phil McGraw, advised Edward Raines on how to handle his daughter's relationship with a man Raines called "the devil."

"At the time, he was like manipulating her," Edward Raines said. "And like telling her, 'Well, your dad can't do anything. You're 24, and there's nothing he can do.' "

Raines, who had threatened to drive a Cadillac into Peterson's house, was advised to maintain contact with his daughter and avoid angry threats. He followed the advice.

"I did reverse psychology," he said.

Christina Raines picked up the story from there.

"He had called me and he said, you know, 'I'm fine with Drew. I'm fine. If marrying him is going to make you happy, I'm happy for you,' " she recalled.

"In my mind, I'm like, right," she added. "There's something going on." It got her thinking.

Raines said her father and a former boyfriend played key roles in persuading her to move out of Peterson's house. The ex-boyfriend said he was worried about her.

Accompanied by a CBS crew, Edward Raines knocked on Peterson's door Friday and announced he was there to collect his daughter's property. When Peterson objected to the crew's presence, police were called and the move-out ended peacefully.

"I opened up my eyes," Christina Raines said. "I knew it was tearing up my dad, and I love my dad."

All About Drew Peterson • Stacy Peterson