WASHINGTON (CNN) -- Five Cubans convicted in 2001 of spying for the Castro regime have asked the U.S. Supreme Court to grant a new trial in a politically charged case that has attracted international attention. 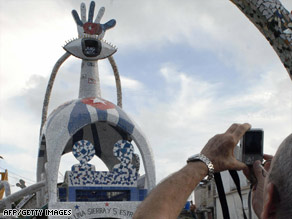 A man takes a picture in September of a sculpture in honor of the Cuban Five in Havana, Cuba.

Lawyers for the men, known as the "Cuban Five," filed a petition Friday, saying their trial in Miami was unfairly prejudiced by the larger community.

"The pervasive and violent anti-Castro struggle of the Miami community would not only infect the jury with hostility but would cause jurors to fear for their (and their families') safety, livelihoods, and community standing if they acquitted," it said.

The petition asks the justices to throw out the verdicts and order a new trial for the five. Cuban leader Raul Castro has offered to exchange about 200 prisoners, believed by the United States to be political prisoners, for the five men.

There was no initial reaction to the court filing from the U.S. attorney's office for the Southern District of Florida. The government is expected to oppose the request for the high court to take up the matter.

A decision from the justices is expected this spring. If the case were added to the docket, oral arguments would be held in the fall.

In 2001, a Miami jury convicted Ruben Campa, also known as Fernando Gonzalez; Rene Gonzalez; Gerardo Hernandez; Luis Medina (also known as Ramon Labanino) and Antonio Guerrero, members of what was called the Wasp Network, on charges they had spied on prominent Cuban-American exile leaders and U.S. military bases. They were arrested in September 1998.

Group leader Gerardo Hernandez also was convicted of conspiracy to commit murder for engineering the shoot-down in 1996 of two planes flown by the group Brothers to the Rescue.

Cuban fighter jets downed the unarmed Cessnas as they flew toward the island, where they had previously dropped anti-government leaflets. Four men died.

During the trial, the defendants claimed they had spied as a way to defend Cuba from hard-line anti-Castro groups in Miami they feared would attack the island. All five are serving time in federal prisons.

The case has been widely followed in Cuba, where the men were regarded as heroes and whose communist leader, Fidel Castro, regularly advocated their release.

A federal appeals court had originally thrown out the convictions, but later reinstated them.

Attorney Thomas Goldstein, representing the five, said lower courts unfairly refused to move the trial from Miami to Fort Lauderdale, 30 miles to the north. "The defendants were very concerned about the prevalent anti-Castro hostility, and the tremendous press coverage," he said, "The [federal] appeals court has made it virtually impossible to get a change of venue, even in this kind of case."

The Cuban Five trial was the only judicial proceeding in U.S. history condemned by the U.N. Human Rights Commission. Eight Nobel Prize winners have also petitioned the U.S. attorney general, calling for freedom for the five.