(CNN) -- A man who faked his drowning death nearly 20 years ago off a Florida beach was found out by North Carolina police who stopped him for a traffic violation, authorities said Thursday. 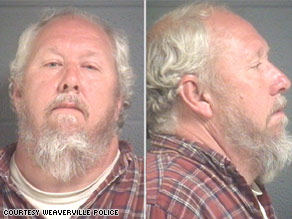 Bennie Wint left behind a grieving fiancee and a daughter from a previous marriage. Over the past two decades, he acquired a common-law wife and another child in Marshall, North Carolina.

Wint told police he faked his death in Daytona Beach, Florida, because he was "paranoid" about his narcotics-related activity at the time, Weaverville, North Carolina, police Sgt. Stacy Wyatt told CNN.

When pulled over in Weaverville on Saturday because of malfunctioning lights on his license plate, the man said his name was James Sweet, Wyatt said. But when Wyatt ran the name through official databases, he was unable to find any information.

"I found it suspicious and believed it to be a false name," Wyatt said. He arrested the man on suspicion of driving without a license and giving false information, both misdemeanor offenses, and booked him under the name "John Doe."

But "John Doe" finally opened up to Wyatt, admitting he was really Bennie Wint and had been on the run since 1989.

Watch how reports of his death were premature »

Wint returned a call Thursday from CNN and asked what an interview with him would be "worth to you." Told that CNN does not pay for interviews, he responded, "Unless you want to pay for it, don't come up here. You are wasting your time. There are 'no trespassing' signs on my property." He then hung up.

According to police reports, Wint was on a trip to Daytona Beach with his then-fiancee, Patricia Hollingsworth. She told police they were engaged and had discussed getting married while on the trip.

But it was not to be. On September 25, 1989, Hollingsworth told beach patrol officials that Wint disappeared while swimming.

"We spent a bunch of time looking for him," said Volusia County Beach Patrol Capt. Scott Petersohn, who was on the beach patrol at the time, although he did not respond to the call. "We used helicopters, boats and boatloads of lifeguards."

Hollingsworth, then 37, told officials Wint entered the ocean about 4 p.m. and swam past the breakers before she lost sight of him, according to the incident report. The report notes Hollingsworth was "very upset" and that after contacting officials, she "began to run north and south in the area," looking for Wint.

Members of the beach patrol, however, thought the supposed drowning was suspicious.

"It is very rare to drown offshore and not wash back in onto the shore," Petersohn said. In addition, he said, the lifeguard on the beach told officials he did not see anyone swimming in the area.

Wyatt submitted Wint's fingerprints to the FBI for identification and, while waiting for the results, searched the Internet for information on a Bennie Wint.

"I found a daughter that was looking for him," Wyatt said. The woman posted information about her father in 2007, saying he went missing under suspicious circumstances.

Wyatt contacted the now-23-year-old woman, who said she was 4 when her father disappeared.

Wint has been released from jail and has not been charged in relation to the 1989 incident. It was not known whether he contacted his daughter.

Wyatt said Wint now has a common-law wife, a child and a business selling NASCAR items. The night he was arrested, Wyatt said, his wife was "distraught" upon learning his true identity.

Wyatt said Wint told him he was involved in narcotics in the 1970s and '80s, and "he ran out of paranoia, thinking people were out to get him." He said he went from Daytona Beach to Ozark, Alabama.

CNN's attempts to contact Hollingsworth were unsuccessful, and it was unclear whether she knows Wint is alive.

Petersohn said he is attempting to find the lifeguard on duty at Daytona Beach the day Wint disappeared to tell him the truth about the supposed drowning.

"For 20 years, that man that works for us thinks he might have missed something in the ocean," Petersohn said.

"I'm glad the guy's alive. I really am. ... It's unfortunate the way it went down at the time, people looking for a body that wasn't out there."

All About Criminal Investigations • Daytona Beach