(CNN) -- A missing Florida fund manager -- whose $300 million in investment funds are actually worth less than $1 million, according to a federal lawsuit -- has turned himself in to face fraud charges, the FBI said Tuesday. 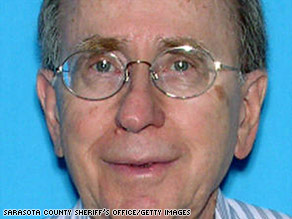 Arthur Nadel, 76, of Sarasota, Florida, turned himself in to the Tampa FBI field office Tuesday.

Arthur Nadel, 76, of Sarasota, "recently transferred at least $1.25 million from two of the funds to secret bank accounts that he controlled," according to a filing last week in federal court by the Securities and Exchange Commission.

The suit, filed January 21 in U.S. District Court in Tampa, charged Nadel with fraud "in connection with six hedge funds" in which he was principal investment adviser.

"Nadel provided false and misleading information for dissemination to investors about the funds' historical returns and falsely overstated the value of investments in the funds by approximately $300 million. In contrast, the funds appear to have total assets of less than $1 million," the complaint said.

Accompanied by two defense lawyers, Nadel turned himself in to the Tampa FBI field office and was taken into custody around 9:45 a.m. Tuesday, FBI spokesman David Couvertier said.

"He has been processed and taken to the U.S. Marshal's Service facility in Tampa," Couvertier said.

He was scheduled to appear in U.S. District Court in Tampa on Tuesday afternoon.

Couvertier would not say if Nadel's surrender was negotiated.

"There is a criminal complaint against Mr. Nadel which has not yet been unsealed."

All About Investments • U.S. Securities and Exchange Commission