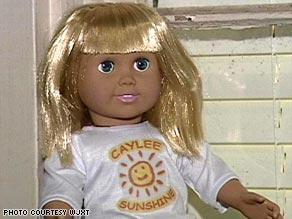 The "Caylee Sunshine" doll would have cost $29.99 but sales of the doll have been suspended.

Jaime Salcedo, president of Showbiz Promotions, told CNN that the Jacksonville-based company intended for the dolls to honor children who die young and raise money for charity. But on Tuesday the company announced on its Web site that it is suspending the promotion.

The dolls were scheduled to go on sale at noon Tuesday for $29.99, according to the company's Web site. The dolls have blond hair, rather than Caylee's brown hair, and wear jeans and a T-shirt that says "Caylee Sunshine." According to the Web site, each doll plays the song "You are My Sunshine."

"However, after reviewing the response to our media introduction of the Sunshine Caylee Doll and listening to the advice of the general public, we feel that it is best to suspend the launch," said a statement on the Web site -- called the "Caylee Anthony Tribute Site" -- signed by Salcedo.

"While we still feel it is important to raise awareness and raise money to help stop this type of crime from being committed, we feel we can be more effective using traditional methods," the statement said.

Caylee was 2 when she was last seen in June. Her skeletal remains were found last month in woods about a half-mile from her grandparents' home. Her mother, Casey Anthony, 22, faces charges including first-degree murder in her death.

"Holding a Caylee Sunshine Doll can help us remember that all the children taken from this world prematurely are dancing, playing and singing their sunshine song forever," the Web site says.

Brad Conway, attorney for the girl's grandparents, George and Cindy Anthony, told the Orlando Sentinel on Monday, "This is an example of another person trying to profit from the tragedy of Caylee's death.

"He has never met my clients, spoken to my clients and has not gotten authority of any type to do this," Conway said. "And after I have a chance to research it, I will likely take whatever legal action I can."

Salcedo appeared Monday night on "Nancy Grace" on CNN's sister network HLN to defend the doll. The criticism, he said, was "not something that we did not expect. We actually have been over it several times ... and for that exact purpose, we did not create the Caylee Sunshine Doll in the likeness of Caylee Anthony. We thought that that would be way off base in this," he said.

"The fact that you gave the little doll blond hair, how does that somehow remove the sleaze from this whole thing?" Grace asked.

Showbiz Promotions said on the site http://www.cayleedoll.com/ that 100 percent of its profits would be given to charity. Salcedo told Grace that "a portion of the sales are going to charity." He would not be more specific, however, saying he did not know how much would be donated because none have been sold.

Salcedo also refused to name the charity that would receive the money. "We contacted a few of the biggest organizations in the world, and especially in the United States," he told Grace. "They don't want to partner up because it's -- it's a policy that they have to follow. They cannot get themselves involved with a case that they're handling."

Pressed on the issue, he said he had contacted the National Center for Missing and Exploited Children, but "their answer was real simple. They don't speak about Caylee Anthony on their Web site. It's not that it's good or bad. They can't do it. They don't raise funds using the name of any children or any situation that they're following. So it was difficult for us. That is the organization that we want to give to."

A disclaimer on the site says, "The Inspirational Caylee Doll is being used to bring awareness to missing and exploited children around the world. Any similarities or likeness to Caylee Anthony are false ... CayleeDoll.com is not affiliated with Caylee Anthony, her relatives or the National Center for Missing and Exploited Children, nor do we make any claim thereof."

The "comments" portion of the Web site mainly contains posts from people saying they are disappointed the doll was suspended.

"Thank you for making this doll and bringing awareness to the situation because Caylee is not the only child that has fallen victim to this type of crime, and it's heartbreaking that people ignore it and just turn away," one post said.

But another post said, "I want to thank you for not proceeding with the making of this doll. I understand your point and what you were trying to do. I just think that making a doll based on a child's death is too painful for the public."

"This is just one more atrocity," said a posting on the Orlando Sentinel Web site. "I have no doubt there have been so many people other than myself who literally began to cry when they ran the video of Caylee singing that song just days before she was killed. Thank goodness the public spoke out loudly enough to stop this."

Caylee Sunshine T-shirts ($12.99) and bracelets and stickers ($3 each) are still offered for sale on at www.cayleedoll.com.

Showbiz Promotions' Internet sales are the subject of an investigation by the Florida attorney general's office, according to the office's Web site. Consumers allege they ordered and paid for merchandise from the company's Web sites, including www.vickdogchewtoy.com and www.wheresmyplea.com, but did not receive the items, the office said.

The first Web site offers a dog chew toy in the likeness of Michael Vick, the former Atlanta Falcons quarterback who is imprisoned on charges related to dog fighting, for $7.77. The second Web site is no longer operational.