Cops: Bearing news of a loved one's death is worst part of job

ATLANTA, Georgia (CNN) -- Police Lt. Keith Meadows won't ever forget the first time he had to deliver the grim news. A mother was crying hysterically on the other end of the phone line wanting information on her son's fate. Meadows knew her boy had just been killed. 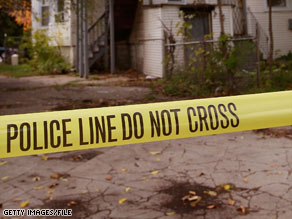 Breaking bad news can be tough for cops. One possible complication: The person you're telling is also a suspect.

Meadows wanted to break it to her gently, in person. It's just the right thing to do. But the woman pressed for more information, and he finally caved.

"She just kept asking me questions: Where is he? What's wrong? And I could hear the worry in her voice, and I just told her. I said, 'Ma'am, your son was murdered. Someone shot him,'" said Meadows, who heads up the Homicide Unit in Atlanta, Georgia.

"And, you know, that mother never forgot that she found that out over the telephone."

It's something the 23-year police veteran regrets to this day.

Police will tell you delivering the news of a death is one of the hardest parts of their jobs. They're trained to shoot guns, track suspects and arrest bad guys. But behind the scenes, officers -- especially homicide detectives -- know that there may well be a time in their careers when they have to inform a family that a loved one is dead.

How do the police relay that news? How much of a toll does it take on a cop?

And it happens thousands of times a year. People are killed in shootings and other crimes; others die in awful accidents. Some kill themselves.

While the U.S. military's "knock-on-the-door" tradition is well-documented, police agencies across the country don't have hard-and-fast rules for how the news is delivered. Police prefer to inform families in person, although that's not always possible. Many agencies try to have a chaplain with the officers when that moment comes.

"You ask yourself: How would you want to deliver this message, because people are going to remember this for the rest of their life," said Danny Agan, a retired police officer who spent 29 years on Atlanta's force, including heading up its homicide unit.

"It is stressful on the person who delivers the news. It's hard."

But, he said, "leaving somebody hanging is a bad choice as well."

It can get complicated, too. Sometimes, police are delivering the news to suspects in the slayings. Other times, cops have to contact another police force to knock on the door of a next of kin. "Usually what that message is: You need to call this detective or officer about so-and-so because there's been a death," Agan says.

And police say nothing can prepare you for the moment. Reactions range from screaming rampages to people passing out. Some fall silent. Others are just utterly stunned. One woman's natural reaction, Agan recalled, was to laugh.

"She stood there and laughed," he said. "You don't know what to expect when you deliver this message, but it goes with the job."

John South has spent 35 years as an Army and police chaplain. He estimates he's delivered the news 300 to 400 times. He's currently one of eight chaplains with the Phoenix Police Department.

"Almost everybody knows why you're there," he said. "They immediately see you and they know there is a problem."

He escorts the officers to the homes. They try to enter the house before delivering the bad news. That way, they can catch the people if they faint. It's also the compassionate thing to do.

"The issue is to be sensitive and caring ... and to really be there to support them," he said. "I'll stay for an hour, sometimes hours."

The worst, he said, are suicides. "Those are difficult for everybody, because it's such a sensitive area," South said. "It's heartbreaking for us, for the officer and definitely for the family."

Sheila Howell knows what it's like to be on the receiving end of awful news.

Her 22-year-old daughter, Whitney Land, and 2-year-old granddaughter, Jordan, were carjacked in metro Atlanta in 1999. They were shot, stuffed in the trunk of their car and the vehicle was set ablaze by Wesley Harris, who was later convicted in their killings.

Howell received a call from a county fire department when the vehicle was first found. At that time, authorities weren't sure whether the bodies were inside. "They said honestly the car is on fire," she said. "They were being fair and they were being right."

Her motherly instinct told her that her daughter and grandchild were dead. "You have this sick feeling, and you know," she said.

A few hours later, she said, her brother, who is in law enforcement, broke the news in person. "He said, 'I can't let you stand here and wonder another minute,'" Howell recalled. "Your brain did not let you process anything other than that."

"You don't forget that feeling. I can't speak for other people who have gone through something similar, but you think about it all the time. You think about the good and the bad, especially on that anniversary. It's kind of that whole day, it just kind of hangs over you. You'll look at the clock and you'll think about what you were doing that time of day."

It's something the officers never forget either, Chaplain South said.

"I'll cry with the family. I don't feel ashamed about that. You can't help but cry," he said. "If you're a human being, it's going to affect you."

All About Murder and Homicide • Police