(CNN) -- A Navy helicopter whipped the waves as the U.S. Coast Guard closed in on the suspected drug traffickers abandoning their homemade submarine off the coast of Ecuador. 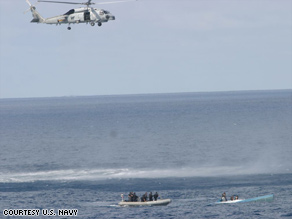 U.S. Navy and Coast Guard personnel approach a sinking drug sub about 200 miles off the coast of Ecuador.

The men didn't go down with the ship, but any evidence did.

In the past, no evidence meant no case. But a new law aims to change that.

The Drug Trafficking Vessel Interdiction Act of 2008 was signed into law in September. The statute makes it a felony, punishable by up to 20 years in prison, to travel through international waters in the vessels, technically known as self-propelled semisubmersibles.

Drug subs come in several forms and are built of fiberglass, wood and steel in the swamps along the west coast of Colombia, under the cover of heavy foliage, Coast Guard officials say.

Despite costing upwards of $2 million, the vessels are generally abandoned at sea after delivering their cargo, according to the Coast Guard. But with cargo values estimated to range from $200 million to $400 million, the investment pays big dividends.

Federal officials estimate drug subs now transport about one-third of all cocaine that moves by sea from South America to the United States.

Detecting the vessels is nearly impossible for law enforcement even with advancements in sonar, radar and infrared technology. Catching them involves a combination of good intelligence and luck, and often relies on the use of helicopters.

Once caught, suspected smugglers often "scuttle," or sink, the subs, sending both vessel and cocaine to the bottom of the sea.

Though maritime law requires drug-trafficking crews in distress to be rescued, the crews are usually released without prosecution, because of a lack of physical evidence.

But under the new law, no physical evidence is necessary. Just being on board a drug sub is proof enough.

A dozen suspected cocaine smugglers taken into custody between December 31 and January 8 could be among the first prosecuted under the new law. The cases are expected to develop over the next several weeks, according to a spokesman for the U.S. attorney's office. Besides a stiff prison sentence, suspects could be fined up to $1 million if convicted.

The suspects were taken in three separate drug sub incidents in which alleged traffickers sank the vessels and cargo. The first came December 31, some 200 miles (322 kilometers) off the coast of Ecuador. Another vessel was stopped January 7 about 550 miles off the coast of Ecuador. The most recent arrests were made January 8, about 150 miles offshore from the Ecuador-Colombia border.

"As we go through the first prosecutions associated with this, we are actually kind of paving new ground here on how it is we have to prepare cases," said Adm. Thad Allen, commandant of the U.S. Coast Guard.

"I think you can see where the planned operation of one of these vehicles on the high seas is a crime in and of itself significantly, significantly simplifies the prosecution for us," he said.

"This is a unique statue probably born out of the frustration of federal officials trying to prove criminal activity on part of the drug traffickers," said Robert Silbering, former special narcotics prosecutor for New York.

"This just throws another obstacle in the way of traffickers."

But as the law evolves, so do the traffickers' tactics, Allen said.

"The latest adaptation," he noted, "is the introduction of liquid cocaine and smaller loads on faster boats hugging the coastline and trying to avoid us by staying in the territorial sea of another nation."