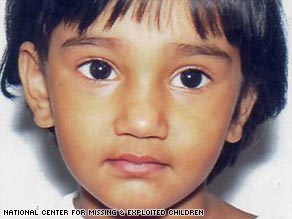 Tangena Hussain, 2, has been missing since October 2 and police in Michigan are asking for the public's help.

Tangena's mother called police on the evening of October 2, 2008, to report her daughter missing after frantically searching the area where she was last seen.

The child's mother, Nilufa Begum, told police she had left the girl in the care of her boyfriend, Jamrul Hussain. Although Tangena and Hussain have the same last name, he is not her father.

Begum told investigators her daughter was with Hussain all day while she worked at the Northland Mall. Hussain said he stopped at a gas station with Tangena while on the way to the mall to pick up Begum.

They stopped at about 9 p.m. to buy gum and juice, he said. Hussain told police he left Tangena in the car for only a few moments and when he returned, the little girl was gone.

He did not call police and did not conduct a search, but instead drove to the mall and picked up Begum, investigators said.

When she saw Tangena was not with Hussain, Begum asked him where she was. His response was cryptic, she told police. He said he would take her to the place where her daughter was.

Begum became alarmed as Hussain drove to a gas station where, he said, Tangena disappeared. They searched for Tangena together, while Begum called the police to report her daughter missing.

A surveillance camera shows the boyfriend, Hussain, going into the gas station's store, police said. On the video, he makes some purchases and leaves within a few minutes. But there is no video of the area where Hussain parked his car, nor any video that could show whether the little girl had been there or how she might have disappeared.

Police have not named a person of interest in the toddler's disappearance.

When the media picked up the story, a teenager came forward, saying she recognized Hussain as the man who allegedly attacked her. During the investigation, police discovered that the young accuser, then 15, had been Hussain's prior girlfriend.

Hussain, 24, was arrested and charged with two counts of having sex with a minor. He is free on bail while awaiting trial.

"My client is innocent of the charges. He did not have sex with a minor child," said Hussain's lawyer, Shawn Patrick Smith.

Tangena's parents said they just want answers. Her father, Mohammad Ahmed, lives in New York and added $5,000 to an existing Crimestopper's reward of $1,000.

"We are praying that someone knows something that can help us find my daughter," Ahmed said. "How can a child disappear without someone seeing something? Something doesn't fit about [Hussain's] story."

When questioned, Begun told police only she and Hussain saw Tangena in the week leading up to her October 2 disappearance.

A Michigan Amber Alert was issued for Tangena at 5 a.m. the morning after she disappeared. But in the months since, police have hit a dead end.

Police and family members are turning to the public for help. If anyone has seen Tangena Hussain or has any information regarding her whereabouts, please call the Detroit Police Department at 313-596-1240.

Tangena is 3' 2" tall, weighs 34 lbs, has black short hair, brown eyes, and is of East Indian descent. She was last seen wearing white cargo pants, brown long-sleeved T-shirt with a cartoon picture on the front and gold sandals.

The reward for information leading to the whereabouts of Tangena Hussain is $6,000.