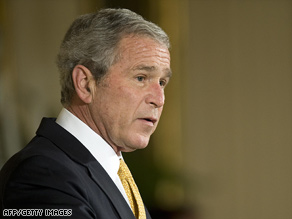 A social worker who met with Gregory Broussard in an emergency room last month told Secret Service agents that Broussard had threatened to kill Bush and blow up the White House, according to an affidavit in support of the criminal complaint.

The circumstances of Broussard's visit to the emergency room were not immediately clear.

Broussard is expected to appear in court Tuesday afternoon. Prosecutors will ask that he be detained, according to a written statement from the U.S. attorney's office in the Eastern District of Louisiana.

Broussard, of Hammond, Louisiana, told agents during an interview at a behavioral hospital that he knew how to make napalm and was a pyromaniac, according to the affidavit.

He also said he had traveled in December to the site of Huey P. Long's assassination at the state capitol in Baton Rouge and to the governor's mansion in preparation for protecting President-elect Barack Obama if he ever were to visit, according to the affidavit.

Long, then a Louisiana senator and former governor of the state, was fatally shot in 1935.

If convicted, Broussard would face five years in prison and a fine of $250,000.