SEATTLE, Washington (CNN) -- Bartender Chris Daw had plenty of patrons to serve early Saturday at the CC Attle tavern, despite the ricin threats that it and 10 other Seattle gay bars recently received. 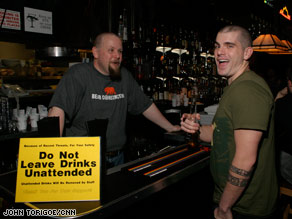 Chris Daw, bartender at CC Attle, and Cory Engler (right) stand near a sign warning patrons to watch their drinks.

The threats -- letters warning that patrons would be poisoned -- appear to be part of the reason business was brisk.

People have flocked to the 11 bars in solidarity since the letters arrived in the mail last week, Daw and others said. On Friday night, hundreds of locals participated in an organized pub crawl designed to support the establishments.

"I have in my possession approximately 67 grams of ricin with which I will indiscriminately target at least five of your clients. ... I expect them to die painfully while in the hospital," the letters read.

Ricin is a poison that occurs naturally in castor beans and can be fatal if ingested or inhaled.

The bars and their patrons have been on guard. The day after CC Attle received the threat, it posted on its bar a sign reading, "Do not leave drinks unattended."

People in the area initially were scared after hearing about the threats, but they soon became defiant, said community activist Alison Luying, who helped organize Friday night's pub crawl.

"We are not going to be terrorized," Luying said.

Investigators have no evidence that whoever mailed the letters has the ability to make good on the threats, Seattle police said. Still, the investigation is proceeding on the assumption that the danger could be real, they said.

The state crime lab is examining the letters for any evidence that could lead to a suspect, a Seattle Police Department spokesman said. Investigators are checking tips from the public and are working closely with the FBI and federal postal inspectors, according to police.

The Capitol Hill neighborhood has long been known as a center of arts and music venues, and the community was in celebration mode during Friday night's crawl.

The Seattle Eagle, one of the 11 threatened bars, was packed. The ricin threat was topic No. 1 among customers.

"I think you have to take it seriously," said Tony Buff, one of the locals who joined the pub crawl. "And I think the bars here have done so. They've been very responsible."

In addition to the signs warning patrons to guard their drinks, everyone is watching out for anything that seems out of place, bar employees like Tim Wagner said.

"We have proven that we will not succumb to terrorism, threats, hatred or fear," Wagner said.

The threats apparently failed to have their desired effect, according to Wagner.

"People are coming out in droves to show their support to the gay businesses, and the bars that have been targeted. Business has actually been doing really well," Wagner said.

All About Seattle • Crime