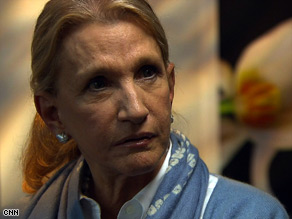 She invested every penny with accused Ponzi-schemer Bernard Madoff. Penney thought she had weathered the bear market just fine, since Madoff put her money in super-safe Treasuries. Then, on December 11, she received a call from her best friend.

Conservative with her money, Penney says she has been working and saving since she was a teenager. She admits that her biggest fear was losing everything and "becoming a bag lady." About a decade ago, when Penney was in her late 40s, she shared her fears with a good friend, who steered her to Madoff, where she thought her money would always be safe.

Best known for the 1982 best-seller "How to Make Love to a Man" and as a former editor of Self magazine, Penney and her friend Evelyn Lauder were the first to use pink ribbons as a symbol for breast cancer awareness. Every success along the way meant more money, which was eventually invested with Madoff. She earned so much money that she was no longer writing and editing but living her dream as an artist.

Sitting in her artist's studio in the SoHo area of New York, she recently said she will start writing again to pay the bills. And she has a few choice words about Madoff, who remains under house arrest in his Manhattan penthouse apartment, where he lives with his wife while the case proceeds.

"Repulsive is mild. Loathsome. It's a visceral feeling. This is not humanity; this is not a human being. This is, again, it's a sociopath," Penney says. "I'm sincerely, and this is the understatement of the year, appalled that this man is not in prison."

But that could change soon if a judge decides to revoke Madoff's bail. In a court filing Thursday, the U.S. Justice Department accused Madoff of having signed about 100 checks -- worth a total of $173 million -- that were "ready to be sent out" before his arrest by the FBI on December 11 on a charge of securities fraud.

Prosecutors said the checks violate his $10 million bail agreement and said it was an attempt to prevent his alleged victims from recovering their losses. If convicted of the charges against him, Madoff, 70, could spend up to 20 years in prison and face a $5 million fine.

On the advice of her lawyers, Penney is not saying how much money she lost. She's not penniless, she says. She has a checking account that will last a few months, a West Palm Beach cottage, a Manhattan apartment and a "beach shack" in Wainscott, Long Island. Over the past 40 years, she earned and paid for all of it herself.

Penney is not asking anyone to feel sorry for her, especially after the acid-response to her first-hand account of her financial woes in a blog called "The Bag Lady Papers" on TheDailyBeast.com. In the blog, she talks about selling the cottage and possibly more real estate and taking her first subway ride in 30 years. She's even considered selling some of her expensive jewelry to pay the bills.

Some readers blasted her as a privileged New York princess. They told her to get a job. Others said they didn't feel sorry for her. Penney says she was surprised by the "vitriol."

"I've never been given a dollar. I never took alimony. I never inherited any money. So, sure, well, who else earned it? Me," Penney says.

Today, she says she has been "Madoffed."

When the phone rang last month with the news about Madoff's arrest, Penney was making a cheese soufflé. Ever the writer, she uses the soufflé as a metaphor.

"Everything was rising. We were all rising. The housing market was rising. Bernie Madoff's money, people like me, my money was making 9, 10 percent," Penney says. "There was this incredible lift of the economic picture. And I think that the crash of the stock market and the crash of Bernie Madoff together are really emblematic that the system is the culprit. Madoff is emblematic of the system, but there's something very wrong with the system."

And just like the investments, Penney says, the soufflé fell, too.

All About Bernie Madoff • Corporate Crime