(CNN) -- Authorities in Kansas are looking for a boy who disappeared about a decade ago, but was not reported missing until a few weeks ago. 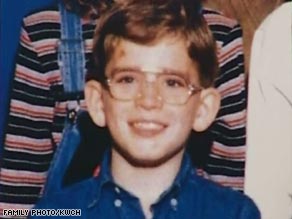 "We don't know what happened to Adam Herrman past '99, when he was last seen," Butler County Sheriff Craig Murphy said at a news conference in El Dorado.

"Is he alive, is he dead? That one I can't answer because we don't know," he added.

Adam was 11 or 12 when he was last seen, Murphy said. At the time, he was living in a mobile home park in Towanda, a small town in southern Kansas, with his adoptive parents, Doug and Valerie Herrman. The couple did not report him missing, Murphy said.

A few weeks ago, a person notified Sedgwick County Exploited and Missing Children's Unit of a "concern" regarding Adam, Murphy said.

"They feel very guilty" about not doing that, he said in a telephone interview. The couple told him the boy had run away frequently, he said, and they believed him to be either with his biological parents or homeless.

Although the Herrmans did not report him missing, "they were very worried about him," he said.

Authorities have searched the Pine Ridge Mobile Home Park, where the family had lived, and discovered an "answer" to one of their questions, Murphy said, without explaining.

"We did find one of the answers we were looking for, but I am holding that one very tightly," he said.

Eisenbise said authorities also executed a search warrant on December 15 at the Herrmans' home in Derby, a town just outside of Wichita. They took the couple's computer, he said.

Murphy said the couple is cooperating and had not been charged with anything.

Citing a relative, the Wichita Eagle reported the Herrmans had taken Adam into foster care and later adopted him.

Michelle Ponce of the Kansas Department of Social and Rehabilitation Services, which oversees adoption and foster care, said she could not release any details regard Adam's case, and could confirm only that he had been in foster care at some point, but was no longer in foster care in 1999.

Adam had been placed in the Herrmans' care when he was about 2, Murphy said in a phone interview. He had been named Irvin Groeninger III when he was born on June 8, 1987, Murphy said, and it was not clear when his name was changed.

His biological parents relinquished their rights as parents about two decades ago, and Adam and his siblings were put in different foster homes, CNN affiliate KWCH reported.

"I thought what I was doing for them was in the best interest of the children and evidently it wasn't," Irvin Groeninger told KWCH. "If he was still in my custody this would have never happened."

Adam's sister, Tiffany Broadfoot, 22, said she last saw her brother about 14 years ago at a birthday party.

A year or two later, he sent her a Christmas card, she said. "And that was the end of my contact with him," she told KWCH.

"He had the cutest little round face, little bitty freckles right up here on the tip of his cheek," she remembered.

"I'm just awestruck as how something like that could actually happen, and how he could be missing as long as he's been and nobody say anything," she said.

Murphy said Adam's name appears on a legal document later than 1999. "We know that he was listed in a legal action as if he was still living at home, and I'm not certain of the date, but it was beyond 1999," he told CNN.

All About Missing Persons