(CNN) -- A statue worth more than $10,000 that was stolen from the Palm Beach, Florida, estate of Wall Street investment adviser Bernard Madoff has been recovered, police said Thursday. 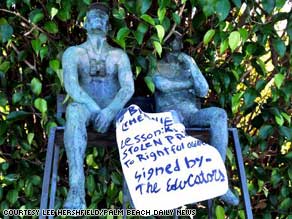 The statue was found with a message apparently aimed at the owner, who is charged with securities fraud.

The statue was stolen December 19, eight days after Madoff was arrested in New York on suspicion of operating a $50 billion Ponzi scheme.

He was charged with securities fraud and is under house arrest in New York while awaiting court proceedings.

Police said the statue, which depicts two lifeguards sitting on a bench, was discovered undamaged in some bushes a few blocks from Madoff's million-dollar Palm Beach estate.

Watch what neighbors think of the statue case »

The note on it was signed, "The Educators."

The theft, which was discovered by a property manager for Madoff, is under investigation, authorities said.

The investor was charged in December with one count of securities fraud.

His $10 million bail is secured by properties owned by him and his wife, including the Manhattan apartment and the Palm Beach estate.